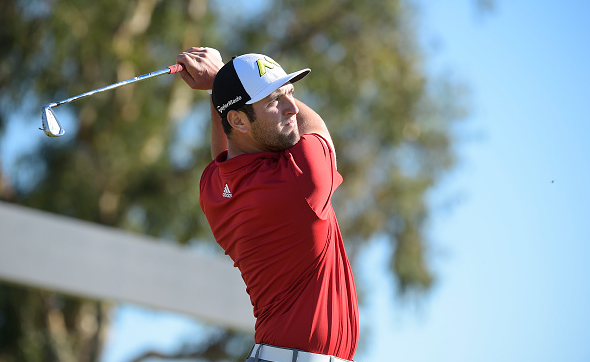 When Jon Rahm turned pro, following an impressive top-25 finish at last year’s U.S. Open as an amateur, there seemed to be no breaking-in period required.

The talented young Spaniard was great immediately, and was seemingly in contention at every tournament throughout the rest of the season. Anyone who followed the PGA Tour closely knew it was only a matter of time before Rahm would win a Tour event. That day was today.

After an unbelievable back-nine, highlighted by his final shot – a drained-60-foot eagle putt, the 22-year-old Rahm emerged from a crowded leaderboard at the Farmers Insurance Open to secure his first PGA Tour title.

How Rahm Did It

Jon Rahm began the fourth round just outside the top 10, three strokes behind leaders Patrick Rodgers and Brandt Snedeker. Rahm’s front nine was respectable: he bogeyed the first hole, but birdied 3 and 5 to go out in one-under.

The leaderboard became very congested early-on, and as more names got into the mix, Rahm was something of a forgotten man. Then his back nine happened.

Rahm absolutely exploded at the turn, playing a bogey-free back nine that included two eagles, with his insane putt on 18th being the exclamation point. That putt separated him from the group and led to a feeling that the tournament was over.

Only Howell III and Pan were able to get within three after a nail-biting finish looked probable.

The 65 for Rahm tied Justin Rose’s opening round score for low round of the tournament. Rahm had his best driving day of the tournament on Sunday, averging over 300 yards off the tee and hitting 11/14 fairways. He also hit an impressive 16/18 greens in regulation.

What It Means For Rahm

Rahm was already considered one of the best young players on Tour, but after this win, that recognition will be more universally accepted.

The Arizona State product burst onto the scene in 2016, finishing T3 in his first tournament after turning pro (Quicken Loans National) and posted a T2 at the RBC Canadian Open less than a month later. He secured his 2016 PGA Tour card despite playing just seven money-earning events.

Rahm will be taking his game to this year’s Masters, and like all PGA Tour winners, is subject to many tremendous exemptions.

Charles Howell III, who always seems to be in the mix at these early-year tournaments, was tied with Rahm going into Sunday’s final round, and got off to a strong start with two early birdies on 1 and 5. An eagle on 13 had him thinking winner’s circle before Rahm went crazy down the stretch.

Howell finished with a 4-under 68, yielding his 14th career runner-up finish (he has two career victories).

The luster on Keegan Bradley has faded some since his breakthrough 2011 season, but his performance on Sunday at Torrey Pines, combined with consistently good early season results, has many thinking that he could be getting back to that level very soon.

Bradley shot a 5-under 67 and held the clubhouse lead until Rahm finished. The T4 is Bradley’s best finish of the new season – a season where he’s had five finishes inside the top-25 (including three top 10s) in just six starts.

With a birdie and an eagle in his last three holes, Brian Harman continued his strong recent form, shooting a 4-under 68 and finishing T9. That makes back-to-back top 10s for Harman, who finished T3 at last week’s CareerBuilder Challenge.

Not Their Sunday Best

Being the defending champion, and a two-time Farmers Insurance Open winner, 54-hole co-leader Brandt Snedeker was the favorite going into the final round.

His Sunday, however, looked nothing like the final round he had last year, when he lapped the field, shooting -3 in terrible conditions when nobody else shot under par.

Snedeker’s 1-over 73 was among the worst of those in the Sunday mix. The other third-round co-leader, Patrick Rodgers, was only marginally better, as three back-nine bogeys ended his chance at his first career victory.

Hunter Mahan, trying to regain the form that made him one of the best on Tour for years, went into Torrey Pines having missed seven consecutive cuts, but had hopes that things would be different this week after a good first three rounds that had him in a tie for 18th.

Mahan’s final round, however, was a disaster, as he shot an 8-over-par 80. While making the cut is encouraging, it will be difficult to keep the good thoughts going after that finish – which included a triple-bogey on the final hole.

“To be honest, after that second shot on 13, I was able to execute it so good; I was able to hit the shots and think clearly, thanks to the experience I had in Canada and at Congressional.”
–Jon Rahm, Farmers Insurance Open Champion