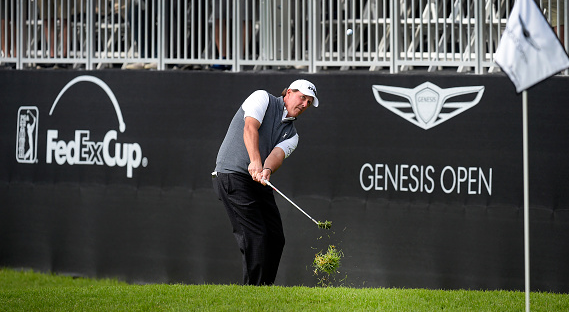 After many delays Thursday and Friday, the Genesis Open wrapped up late Sunday night with Dustin Johnson capturing his first victory of the 2016-17 season.

Johnson, who is the new world number 1, shot an even-par final round to finish at 17-under.

Thomas Pieters carded the round of the weekend, firing a Sunday 63 and jumping 23 spots up the leaderboard into a share of 2nd with Scott Brown.

Justin Rose, Wesley Bryan, Kevin Na and Charley Hoffman round out the Top-5, all finishing at 11-under.

To wrap up the Genesis Open, here are the 3 best shots of the tournament.

Week-after-week Mickelson provides fans with some magic around the greens and he sure didn’t disappoint this week.

The 46-year-old has proven to have delicate touch with a lob wedge in hand – here are three prime examples of his short game skills.

A hat tip and a thumbs up.

Mickelson ended up finish T34 at 4-under, 13 shots back of Dustin Johnson’s winning score.

Pretty ironic that Tringale’s dunk from the fairway came on the same day as the NBA Slam Dunk competition. Tringale was playing his third shot on the par-4 18th when his approach shot found the back of the cup, on the fly.

Tringale went on to finish T8, a very impressive showing at Riveria with a stacked field.

Unfortunately, this week didn’t go as planned for Matsuyama. The FedEx Cup points leader, Matsuyama, carded an opening round 68 but followed with a birdie-free second round 80.

Matsuyama provided one of his famous disappointing reactions where we think his shot is headed wayward. However, those shots are typically inside of 10 feet. In this clip, Matsuyama is seen putting his head down before his tee shot one hops off the pin and settles 3 feet from the flag.

The highest of standards. pic.twitter.com/Ln4KpD8VhP