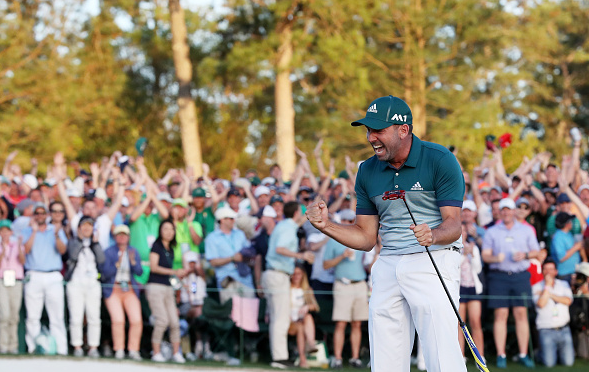 Sergio Garcia, El Nino, captures his first major title with a playoff win over Justin Rose. Garcia finally got the job done after many years of failure on major championship Sundays. The Spaniard drained a 12-foot birdie putt on the first playoff hole at Augusta National to secure the iconic green jacket.

Rose finished runner-up after his bogey on the first playoff hole slid past the hole.

After a Sunday 68, Charl Schwartzel finished in 3rd alone. Rounding out the top-5 were Matt Kuchar and Thomas Pieters. Pieters fired a final-round 68 while Kuchar carded a 67, which included an ace at the par-3 16th.

To wrap up coverage of the 2017 Masters, here are the three best shots from the week.

While watching this live on TV, right when Kuchar hit his tee shot and I saw it land on the green – I knew it had a chance to go in. Sure enough, Kuchar made a memorable ace on the par-3 16th (which saw three aces last year).

High fives for everyone!

This hole-in-one allowed Kuchar to play his final five holes in 5-under-par.

This is just an average 15-footer that found the side of the hole, but it was much more than that. This was a breakthrough and a long time coming for Garcia. He only needed two putts to win his first major, and the Masters, but Garcia only used one.

Congrats to Garcia on finally getting the job done after many years of heartbreak!

All three of the best shots from the Masters are coming from Sunday’s round… But Henley’s hole-out eagle on the 5th deserves a spot in this recap.

What a week. One that I will not forget for a very long time. Until next year, folks!