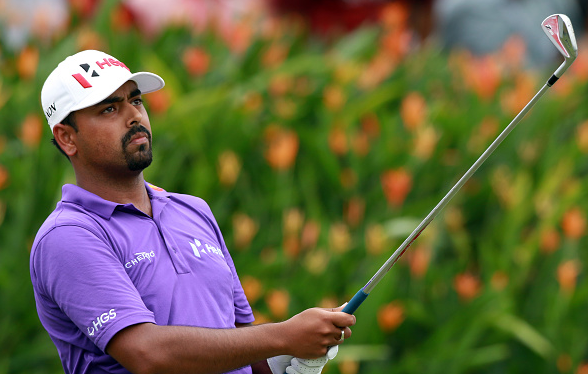 India’s Anirban Lahiri holds a 4-stroke lead over Justin Thomas heading into the final round of the CIMB Classic. A win at at TPC Kuala Lumpur would be life-changing for the 29 year-old Lahiri, who currently plays part time on three pro tours (PGA, European, and Asian).

In addition to 500 FedEx Cup points and over one-million in earnings, a victory would give Lahiri a two-year PGA Tour exemption, along with invitations to the most prestigious Tour events of 2017: Tournament of Champions, THE PLAYERS, Masters, PGA Championship, and Invitationals (e.g. Arnold Palmer, The Memorial).

After his round, Lahiri commented on his love affair with Malaysia, his mindset, and whether or not a four-shot lead is safe.

PRESS: Surprising to be in another country and to be the crowd favorite, as well?

LAHIRI: I’d like to think it’s a home crowd. I’ve had quite a love affair with Malaysia, whether it’s the Malaysian Open or whether it’s the two EurAsia Cups where we’ve had tremendous support and there’s a lot of Indians in KL and Malaysia.

So it definitely feels like home. I’ve been coming here ever since I was a junior. I played in Malaaca I think in 2004, so it’s been 12 years now. I’d like to think that I’m going to have some home crowd support tomorrow, yeah.

PRESS: You talked about how you’ve been making a lot of birdies coming in from Macau and entering the week, as well, and lots of birdies on this golf course, but what is it that you and Rajiv worked on Monday when you got to TPC KL?

LAHIRI: Funny enough what we worked on had nothing to do with me making birdies. We worked more on making sure that I get a little bit more confident off the tee. I think that’s still an area that I want to improve on.

I haven’t found as many fairways with my driver as I’d like, and that’s what we were working on because I felt like my swing is not 100 percent. It’s definitely better right now than where it was in Macau, no doubt, as you can see.

But I think the scoring aspect is more of a mental thing, and I think I’m quite focused on just what I need to do, which is hit fairways, try and hit it close and then use my advantage of having played here a few times before to know which way it’s likely to break. That’s what’s helped me make putts this week.

PRESS: Going into tomorrow with a four-shot cushion, what’s the plan?

LAHIRI: It’s the same. I don’t even consider it — I don’t consider any lead safe out here. This golf course is such that, you’ve seen guys shooting 63, 61. I’ve shot 61 before. Justin shot 60 last year.

I have to go out there and I have to do the same exact thing. I have to just keep making birdies, because you can’t play defensive golf here. You just have to hang in there and maintain your focus right through.

The 2022 PLAYERS Championship: Money, Points Earned By Every Player