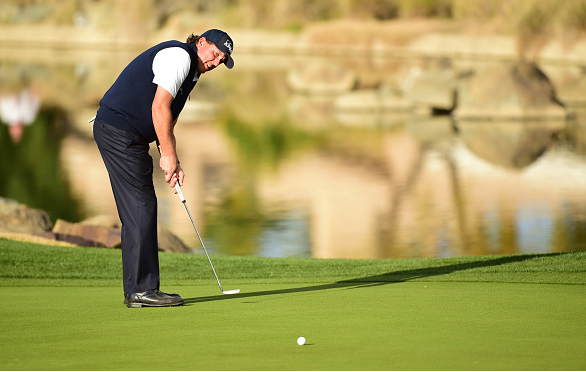 The CareerBuilder Challenge kicks off this morning from La Quinta, CA at PGA West. It’s the first PGA Tour event of the 2017 calendar year which will be played on the U.S. mainland.

The three big storylines are: Jason Dufner’s title defense; the long-awaited return of fan favorite Phil Mickelson (who is also the event’s new ambassador); and the possible turnaround of a few players who have fallen on hard times recently.

Without further ado, here are the three storylines we’ll be following at PGA West.

Undeniably, the most popular player in this week’s field is 2002 and 2004 CareerBuilder Challenge winner Phil Mickelson. The 5-time major champion is (probably; we’ll get to that in a minute) making his 2017 debut at PGA West.

Since the Ryder Cup, back in early October, Mickelson has played just once in the early 2016-17 Tour season, when he posted a T8 in Napa (CA) at the Safeway Open in early October. Three straight 69s followed by a final round 67 was an encouraging season start.

While Mickelson is committed to playing the CareerBuilder if he’s healthy, there is concern that he might not be able to tee off on Thursday, citing recovery from two recent hernia surgeries. Earlier this month, Mickelson referred to his chances as “50/50.”

If he does play, he’ll have the most eyes on him of anyone in the field – just as he does in most every tournament that doesn’t involve Tiger Woods.

Mickelson is coming off another successful season, although he still has not won on Tour since the 2013 Open Championship. He was in championship form at last year’s Open Championship at Royal Troon, putting together an all-time great major performance, where he barely lost in a duel with the one man in the field, Henrik Stenson, who was even in the same ballpark over those four days.

Even though it was yet another major runner-up, Mickelson’s performance showed that even at 46 years old, he still has some great golf left in him. He finished in the top-3 four times in 2015-16, including a T3 at last year’s CareerBuilder Challenge.

In his most recent big-time action, he played tremendous at the Ryder Cup, going 2-1-1 for the victorious American team, with his only loss coming in Sunday singles to Sergio Garcia – despite dropping 10 birdies. It was an unfortunate theme to his 2016 season: No matter how great he was, there always someone just a little greater.

In the two-year stretch from 2012-2013, Jason Dufner looked on the verge of becoming one of the PGA Tour’s premier stars. In mid-2012, he went on a ridiculous five-week stretch, famously right after getting married, where he won twice, finished runner-up in another tournament, and posted a T4 at the U.S. Open.

In 2013, he played well in all four majors, including a victory at the PGA Championship. Since then, however, he has been very average, contending little, and while he has not been terrible, he had clearly dropped off significantly from where he was at his peak.

That’s why it was so big for his career when he won last year’s CareerBuilder. The win did not come out of nowhere, but it felt like it was the first time we had heard his name in years, aside from his personal issues with his now ex-wife.

The victory led to a nice bounce-back season for Dufner, as he posted six top-10s and finished 19th in the final FedEx Cup standings.

Dufner turns 40 in March and hopes that he still has more victories ahead of him. His performance this week, at a place where he has recently won, could be telling of what we might see from Dufner in 2017. He is coming off a missed-cut at last week’s Sony Open, but a first round 65 had to be encouraging.

The CareerBuilder Challenge field contains a number of players who have had an exceptional struggle as of late, and one of the big things to look out for this week is if any of these guys can begin to make a move to get their careers back on track.

Here are a few of them:

The 33-year-old Aussie received a two-year Tour exemption for winning the 2015 AT&T Byron Nelson. He finished the 2015 season well, but since then, his career has been an absolute nightmare.

Bowditch is extremely personable and self-deprecating making him very easy to root for. Will this be the week he finally gets back on track?

Charlie Beljan has never been among the elites on Tour, but used to at least be a respectable player. He even won a tournament in 2012. Recently, however, it is difficult to find a regular player who has been worse.

Beljan entered 13 events in the 2015-16 season and made the cut in just one of them, a T74 at the season-opening Frys.com Open where he still missed the third round cut. The finish earned him exactly ONE (1) FedEx Cup point for the season.

Beljan has not played a fourth round since July of 2015. This will be his first tournament of the 2016-17 season.

Once one of the rising young stars on Tour, Mahan’s fall has been one of the most confusing developments in recent years. From 2007-2014, Mahan won six times, played on multiple Ryder Cup teams, and made it to the Tour Championship, the final round of the FedEx Cup playoffs, all eight years.

In 2016, Mahan had only one top-25 finish and missed 13 cuts in 22 events. He has only made one cut since last May: a 70th place finish at the Travelers Championship. He has missed the cut in all four events of the new season.

While he does not look close to turning his career back around, this is still a man who has had tremendous success in the past, and with this being his first tournament of 2017, it could be a good indicator of whether he is ready to be great again.