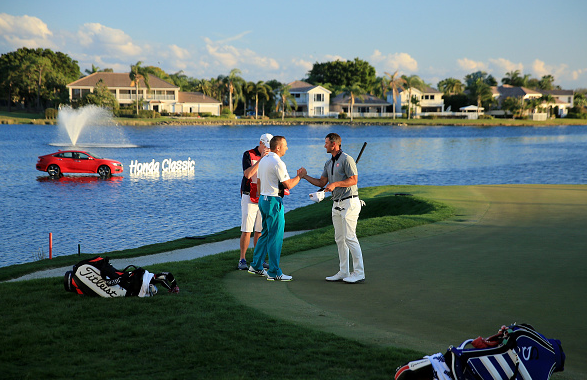 The Honda Classic marks the Tour’s 2017 move from West Coast of California to the golf paradise of Florida – where a myriad of professional golfers call ‘home’.

This year’s edition brings an impressive collection of elite talent to Palm Beach Gardens, even when factoring the absence of the two big, previously committed, names that were forced to pass due to injury: Tiger Woods and Rory McIlroy.

The field includes 10 players ranked inside the world top-20, including defending Honda champ Adam Scott (No. 7), Justin Thomas (No. 8), who already has three wins this season, and 2016 Honda runner-up Sergio Garcia (No. 9). Other top-ranked players include No. 12 Justin Rose, No. 13 Danny Willett, No. 14 Rickie Fowler, and Paul Casey (No. 16).

With that, here are the Power Picks for The Honda Classic at PGA National.

The 2015-16 PGA Tour season was another great one for Adam Scott. He chased a win at The Honda Classic with a victory the very next week at the WGC-Cadillac Championship (now the WGC-Mexico). While he was mostly quiet mid-season, Scott finished on a tear, posting top 10s in all four FedEx Cup playoff events, including 4th place in the first three.

Scott played at last week’s Genesis Open in L.A., where he finished with a solid 9-under-par – good for T11. It was Scott’s first PGA Tour event of the 2017 calendar year, and first U.S. event of the 2016-17 season. Looking to become the second player in history to successfully defend at the Honda (Jack Nicklaus did it in 1977-78), Scott is hoping that his elite iron game will not let him down in Palm Beach Gardens.

Entering a crucial year of his somehow still majorless career, Sergio Garcia, now 37 years old, is playing his second U.S. tournament of the season. He already has a 2017 win in Europe, fending off a strong field at the Dubai Desert Classic.

In addition to his runner-up finish at last year’s Honda Classic, Sergio finished T8 in 2014. With one more victory, he would pass Seve Ballesteros as the all-time PGA Tour wins leader among Spanish players.

Already with three wins on the season, Justin Thomas marches into PGA National, his local course, in tremendous form. That combined with previous positive results at the Honda makes him one of the best bets in the field.

Last year, Thomas was the only man in the field to shoot under-par in all four rounds, going 69-69-68-69 to finish in a tie for third place.

Thomas Pieters was the unquestioned break out star of the European Ryder Cup team at Hazeltine. The 25-year-old long bomber scored the most points for either team.

The Belgium star was also incredible at The Olympics, where if not for a third round 77 would have walked away with a medal. He finally broke through in an official PGA Tour stroke-play event with a T2 at last week’s Genesis Open – highlighted by a lights-out final round 63.

While Justin Rose did win the Olympic Gold Medal in 2016, he was winless in PGA Tour events, the first time in seven years he exited the season without at least one win. His three top-5s (in just 4 starts), including a T3 last week, to begin the new season show that he is serious about getting back in the win column.