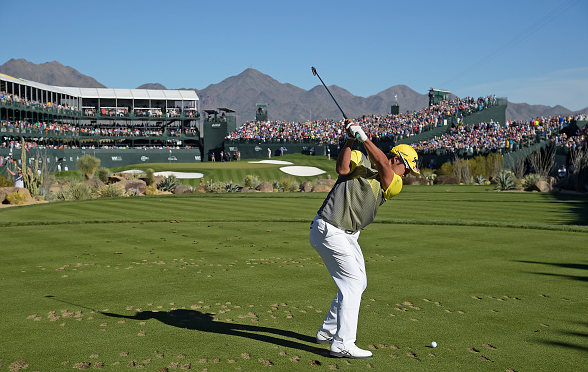 The Waste Management Phoenix Open is one of the more popular events on the PGA Tour schedule, primarily because of its rowdy atmosphere – specifically at the Stadium Course’s 16th hole.

Aside from being raucous and unique, the TPC Scottsdale-hosted tournament is also one of the oldest on Tour, and has been won by some of the most iconic names in history including Arnold Palmer, Jack Nicklaus and Johnny Miller.

These four also make up 80% of this week’s power picks. Our final selection this week, is also a young gun – who recently cracked the top-50 (and we would not be surprised to see him inside the top-10 by year’s end) thanks to an epic win at Torrey Pines: Jon Rahm (#49, 22).

Here are this week’s power picks for the Waste Management Phoenix Open.

Matsuyama is the defending champion in Scottsdale. The 24-year-old Japanese superstar beat Rickie Fowler in an epic 4 hole playoff to claim (his then) 2nd PGA Tour victory. Matsuyama has become one of the hottest players in the world over the past several months, and is now ranked inside the top-5. In addition to his Phoenix Open victory last year, Matsuyama was T2 the year before and T4 in 2014. This is a course where he is obviously very comfortable.

Like Thomas, Spieth took the last two weeks off after competing in the year-opening Hawaii swing – where he finished third in both tournaments. At world #6, the two-time major champion Spieth is the second highest ranked player in the field behind Matsuyama. Spieth has consistently shown that he can compete anywhere, and if he can build off the form he’s shown on recent weekends, the two-time major champion could win in a runaway.

Justin Thomas will be coming into the Waste Management Phoenix Open well-rested and ready to continue his unbelievable season. The 23-year-old from Kentucky is now the world’s #8 ranked golfer, with three victories in just five starts in the 2016-17 season. In two previous appearances at TPC Scottsdale, Thomas has a missed-cut (2016) and a T17 (2015) – although he’s never entered with this kind of hype and confidence.

Now a PGA Tour winner after dominating the Sunday field at Torrey Pines, it will be interesting to see how the fiery Rahm responds. An Arizona State product, Rahm should feel comfortable at this course, and in this environment. He finished T5 in 2015, his only appearance at TPC Scottsdale. Nobody should be surprised if the former world #1 amateur is in the mix again this Sunday.

Reed, the biggest star of the Americans’ 2016 Ryder Cup victory, is one of four players in the field ranked inside the world top-10 (at #9). Reed is coming off another successful season in which he won the Barclays, and had eleven top-10 finishes. In two events in 2017, Reed has two top-15 finishes (T6 at SBS Tournament of Champions, T12 at CareerBuilder).