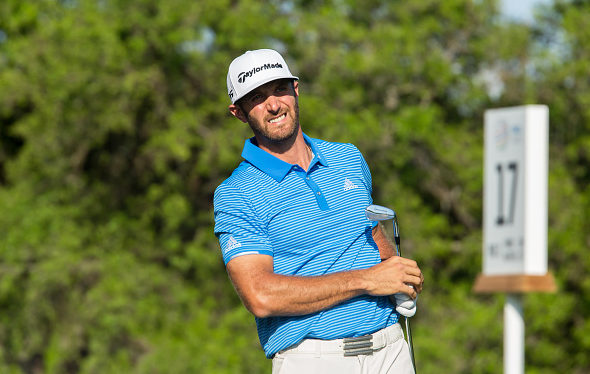 Because it precedes The PLAYERS, the field at the Wells Fargo Championship is not exactly star-studded. But golf fans will be treated with the return of world No. 1 Dustin Johnson, following three-weeks of rest due to a back injury incurred at the Masters.

Other top players in the Wilmington (NC) field include 5-time major champion Phil Mickelson, and Australian Adam Scott, currently ranked No. 11 in the world.

The Wells Fargo is normally played at Quail Hollow Club, but because it is hosting this year’s PGA Championship, the tournament will make a one-year stop at the Tom Fazio-designed Eagle Point Golf Club, which measures an impressive 7,425 yards.

As we do each week, here are the 5 Power Picks for the Wells Fargo Championship.

The Wells Fargo Championship marks Dustin Johnson’s first start since the withdraw heard around the world. Since the season started, an anomalous missed cut at the Farmers Insurance Open in January is DJ’s only finish outside the top-10 (top-6 to be exact).

Not only is this DJ’s first start since The Masters, it is also his first attempt at the Wells Fargo since 2011, where he missed the cut. His only two other appearances came in 2008 (MC) and 2010 (T29). There may be some rust to shake off, but at a course that nobody in the field has played in an official, competitive PGA Tour event, the unreal state of his game is the biggest advantage anyone has.

Last year, Phil MIckelson nearly ended his 3-plus year winless streak at Quail Hollow, posting a final round 66 that left him in a tie for fourth, two strokes behind winner James Hahn. Phil was also T4 the year prior, and in 2012 as well.

He has consistently finished very high in this event, and has NEVER missed a cut in his 13 starts at the Wells. His best finish was a solo runner-up in 2010, the year Rory McIlroy lapped the weekend field.

The 22-year-old Spanish sensation has been phenomenal in 2017. He won the Farmers Insurance Open, a tournament that embarrassed many of the world’s best (Dustin Johnson, Jason Day, Rickie Fowler, Tiger Woods, Jimmy Walker, and Brooks Koepka all missed the cut).

Following his breakout win at Torrey Pines, Rahm has finished inside the top-10 in four of his six starts, with three of those being top-5s – runner-up to DJ at the WGC-Dell Technologies Match Play, T3 at the WGC-Mexico, and T5 at Pebble Beach. This will be Rahm’s Wells Fargo debut, but as a rookie, most of his starts are his debut, and it has not slowed him down any.

Adam Scott is making his eighth start of the season, and is coming off an impressive T9 at the Masters, his second top-10 of the season (his other being T10 at CIMB Classic).

Following a tremendous run in the 2016 FedEx Cup playoffs where he finished with two runner-ups and a solo-fourth in the final three events, Paul Casey is having another under-the-radar type season.

Casey seems to perform his best on the big stage. He’s coming off a solo-sixth at the Masters, highlighted by a 4-under 68 in the final round. The Englishman has also finished inside the top-20 in each of the three WGC events this season (T12 HSBC, T16 Mexico, T9 Dell). This will be Casey’s fourth appearance at the Wells Fargo (T41 last season, MC 2011, MC 2008)