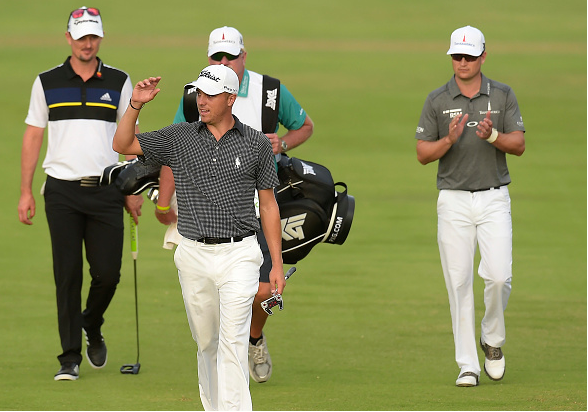 Justin Thomas won the 2017 Sony Open at Waialae Country Club in Honolulu, Hawaii, and became the first player since Ernie Els in 2003 to win in Kapalua and at the Sony in the same season.

Thomas started the Sony with an opening-round 59, and never looked back – setting the PGA Tour’s 72 hole scoring record with a 27-under 253. The win moved Thomas up to No. 8 in the world and into the top spot in the FedExCup race.

After his dominating performance, Thomas sat down with the media and took some questions. Here’s a round up of some of the highlights.

1. Tell us about this past week, and what you’re thinking right now?

THOMAS: It was a very fun week. I just can’t get over how fast these two weeks went by and how much of a blur they almost are. I played some great golf. I’m really excited where my game is and how comfortable I’m feeling when I’m out there.

This win meant a lot because of how I did it. The first wire-to-wire win. I mean, I had a hard time getting focused up there today. I was nervous today for the first time I’ve felt like that in a long time. To be able to handle that the way I did, I was very proud. All I could hear about from everyone and reading everything is no one has ever blown a seven-shot lead before. A lot of things go through your head when you wake up at 6:30 and you don’t tee off until 12:40.

2. Did you see these two weeks coming?

THOMAS: I don’t think anybody can say they necessarily saw something coming, but I felt there was no reason why I shouldn’t win them or shouldn’t be in contention. I’ve always felt like I had the game to do so. I have been playing well. I’m just in a good spot mentally right now. I would say, like I said, you can’t expect wins or you can’t be like, look, I’m going into this event and I should win this. It’s more of just like, look, I’m playing well enough, if I manage everything well and I’m smart out there, I should have a chance to win.

3. Have you won back to back at other levels as a kid and stuff? What was that experience like?

THOMAS: In junior golf, I won a pretty good amount of times. I don’t think — in college I did. I won SECs and Regionals back to back my freshman year.

I was playing last week and then I just got on a plane and came here, and I started a tournament three days later.

It hasn’t hit me yet. I’m sure it will on this long travel day home I have coming up.

4. What’s going to be key to managing your expectations that will naturally come after winning?

THOMAS: Just blocking out everything, a lot of the things I hear. I understand that — you know, looking at guys like Rory or Jordan, Jason Day, they go out there and they finish 10th a couple of events in a row and then finish 20th, everyone is like what’s wrong with them. I don’t know if I’m to that point yet or when it will happen or whatever. That’s the kind of stuff you’ve just got to block that out.

I’ve always expected this of myself. It just hasn’t happened yet. Now that it’s happening, I continue to have the same expectations. I just need to continue to put the work in and just be ready every time I tee it up.

5. The nerves you felt today, were they different from last week?

THOMAS: I was more nervous teeing off today then I was in the other events. Just like I said, all I heard from — I guess I didn’t necessarily hear it, but yesterday I remember hearing no one has ever lost a seven-shot lead.

Two hours before my tee time today — or two hours before I started to warm up, I couldn’t look anymore. It was just like, no one has ever lost a seven-shot lead, no one has ever lost a seven-shot lead. I’m just like — I go out and play okay, a bad break here and there, if someone shoots 9-under, I lose. That’s how I was thinking. Someone is going to go out and shoot 8 or 9-under today. I need to go post a good number. I just tried to block that out that I kept hearing in my head. All morning it was tough to keep my mind off things. I probably listened to music five hours or four hours. I do that most mornings to try to keep my mind off that.