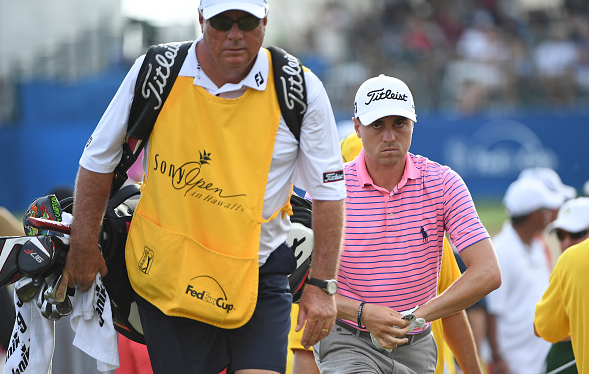 Justin Thomas heads into the final round of the Sony Open with a 7 shot lead after posting another strong round of 5-under 65 at the Sony Open.

Thomas, incredibly, will be going for his 3rd win of the young PGA Tour season (8 weekends in, 36 weekends to go).

After his round, Thomas entered the media room at Waialae, and took some questions from the press.

1. You mentioned on TV being proud of the bogey-free round. Five-shot lead, are you thinking today, still play aggressive, don’t give anything away? Is that an intentional thought going into the day?

Thomas: It was kind of a smart aggressive. Trying to think of examples. But there just was times, I would say like 4, where when I’m hitting it well, even when the pin is front left, it’s a pretty good number, and I’m usually going to be starting that thing left and let it fade to it. I understand that left is dead and I know it’s a bad spot.

So today I’m aiming more low right, and if it goes straight, I’m right next to it, and if it tucks like it should, it’s over where it was. It’s more so like that, to where I’m going to have birdie putts, but not quite as aggressive, just because I don’t need to be.

But any time I had a wedge or a 9-iron or anything like that in my hand or an acceptable pin, tried to be aggressive. I just really didn’t execute the shots as well.

2. Are you proud of your maturity we’ve seen over the last few months, being able to hang in today like when you were not able to get anything going early?

Thomas: Absolutely. My rookie year, I have would not have been able to do what I have done the 2016, 2017 season so far.

I think the biggest example is in Malaysia on Saturday. I was 4-over through I think 13 or whatever it was, and birdied the last five holes. That’s the reason I had a chance to win that golf tournament. If I don’t do that, I’m nine — somewhere between seven and nine back going into Sunday and that’s not really achievable.

So I’m very, very proud and very pleased with how I’ve handled everything. But that’s in the past and I just need to keep doing it.

3. We talked on Thursday after your 59, the relative success of the entire class of ’11. In your opinion, why has the class been able to come out so quickly and do what all of you have been able to do?

Thomas: I’m trying to think of how to say this without sounding really arrogant, but I just think we’re all good. I think we’re all very accomplished. We’ve won at every level we’ve played. And I know that a lot of people have.

I think when one person does something, it pushes us more. But also, just like a lot of the young guys, we don’t have any fear. We expect to play well. We expect to do well. It couldn’t happen without a little bit of game, so I’d like to hope that we have some of that.

4. That you guys come out with no fear and that has been a trend lately with the young players. Tiger Woods was almost laughed at when he came out the same way. You had to earn your stripes back in the day I guess. What do you think it is that’s different now? Is it a society thing?

Thomas: I’d say it’s because of him honestly. I think what Tiger did, you can’t put into words what he did and continues to do for this game. Even the money that we’re playing for to the people that enjoy golf and the fans of golf, I mean, I got into golf, as much as I did, watching him play. I knew he was in his early 20s and winning majors.

You know, people talk about how big of a deal it is to win a TOUR event in their low 20s, but the golf ball doesn’t know how old you are. I think that’s a mentality I’ve always had. I’ve never understood why a 55-year-old can’t win and the same reason an 18-year-old can’t win. Yeah, their games may not be as exactly matured or not at the peak they could be at some point in their career, but like I said, that golf ball doesn’t know.

I think watching him do what he did at his young age, at least for me, it gave me all the hope that I could do it.

5. Given the different courses and conditions, etc., can you assess the difference in how you’re playing this week compared with last?

Thomas: Pretty similar. Yeah, it’s obviously two total and completely different golf courses. A lot more drivers last week. Just kind of whaling away more so. The fairways are huge this week. It’s a lot of position, and getting in the fairways, but I am kind of starting to hit a decent amount of drivers. Just to use my length to my advantage, and I feel comfortable with some of the drives.

It’s pretty similar. I mean, I feel like I’m hitting — I’ve driven it pretty well this week, and I drove it pretty well last week. And the irons are, like I said, not as sharp today. But they were pretty good the rest of the week, kind of like how they were last week.

Bonus: If you were to describe how you were playing overall, general, one word, what would it be?