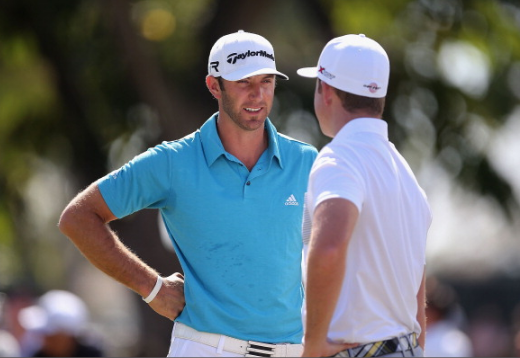 Luke List and Dustin Johnson share the lead at the RBC Canadian Open at 7-under par. The co-leaders will tee off at 1:35pm.

Despite DJ being the hottest golfer on the planet, ranked No. 2 in the world, and List showing up at # 309, here’s a rundown of five things that the duo have in common.

DJ, who just turned 32 last month, is seven months older than List who will hit 32 in January.

2. Both had successful All American careers in college.

List and DJ were All Americans in college, both graduating in 2007. List, at Vanderbilt, had the better success early on (Freshman & Sophomore) – even finishing runner up in the 2004 U.S. Amateur. While DJ gradually improved and was named First Team All American in both his Junior and Senior year.

With both being the same age, and graduating the same year as All Americans, the two had to run into one another at some point, right? Yep. List and DJ were teammates on the U.S. Palmer Cup team in 2007 (their senior seasons). The matches took place at Caves Valley Golf Club in suburban Baltimore. Both List and DJ won their singles matches to help capture the title for the Americans, with List’s 6 and 5 win over Europe’s Gordon Yates actually being the clincher.

The two ran into one another again that season at the Jones Cup, one of the most prestigious amateur golf championships in the country. List took home the 2007 title finishing the 3 day tournament at Sea Island Golf Club with a 10-under par. Coming in at T11 was Dustin Johnson (and Rickie Fowler) with a 2-under total.

5. DJ and List are consistently ranked as two of the longest drivers on tour.

There you have it. Despite the vast difference in FedEx Cup standings, World Rankings, and bank accounts, the two PGA Tour long bombers do have some similarities.