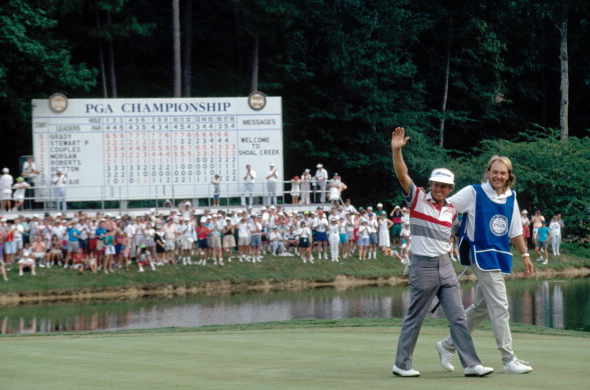 The PGA Championship is one of golf’s four majors. Most of the greatest names in golf have their name etched on the Wannamker Trophy, from Gene Sarazen and Bobby Jones to Jack Nicklaus and Tiger Woods.

There are also several names on the trophy who essentially won the PGA Championship and not much else in their PGA Tour careers.

Here’s a list of the five PGA Championship winners (since stroke play in 1958) who won two or less PGA Tour events outside of their major victory at the #PGAChamp.

Micheel entered the 2003 PGA Championship at Oak Hill ranked 169th in the world with no wins in his career. The then 33 year old Micheel beat Chad Campbell by two strokes. He would never win again on tour. Micheel’s only PGA Tour win is a major.

Grady entered the 1990 PGA Championship at Shoal Creek as a 33 year older with one PGA Tour to his name (the 1989 Manufacturer’s Hanover Westchester Classic). Following his second PGA Tour win, and first major victory, Grady never won again on tour.

Yang will always be remembered for defeating Tiger Woods at the 2009 PGA Championship at Hazeltine. It was the first time that Woods had failed to win a major after holding at least a share of the lead at the end of 54 holes. Woods would never come this close again at a major, and at the PGA Championship, the 14-time major winner has gone T28, CUT, T11, T40, CUT, CUT since this shocker. Can we call it the curse of the Yang?

Beem came into the PGA Championship in 2002 at Halzeltine as a 32 year-old with two wins to his name (1999 Kemper Open and The International in 2002). Beem hasn’t won on tour since, and lost his exemption status about 5 years ago. He’s now a golf analyst for Sky Sports.

Marr won the PGA in 1965 at Laurel Valley Golf Club in PA at the age 31. He beat Billy Casper and Jack Nicklaus by two strokes. Marr would not win another PGA Tour event following his major win. Prior to his victory at Laurel Valley, Marr won two other events – the 1961 Greater Seattle Invitational and the 1962 Azalea Open. By his mid-late-30s, Marr transitioned into broadcasting where went on to become a popular golf analyst for ABC Sports for nearly 20 years. Marr was also one of Arnold Palmer’s best friends and their long running joke was that between the two, they had won the Grand Slam.