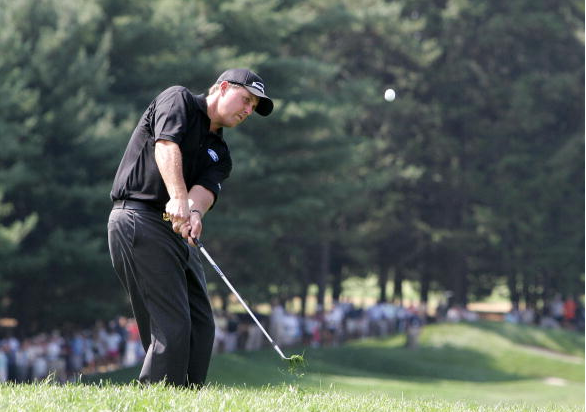 Phil Mickelson’s win at the 2005 PGA Championship at Baltusrol was one of the most memorable. At the time Mickelson was 35 years-old, and one year removed from finally breaking through with a major at the 2004 Masters.

Prior to his swing on the approach shot, he famously walked a few steps up from his ball and tapped the Nicklaus plaque (Jack’s 1 iron shot in the 1967 U.S. Open) for good luck.

Mickelson’s ball landed on the edge of the green, only 50 feet from the hole. He then famously flopped his 3rd shot to just 2 feet of the hole which led to an easy birdie, and his second major title. Steve Elkington and Thomas Bjørn tied for second, losing by a single stroke, at 3-under par.

Here’s the video recap of the tap and flop, via PGA on Instagram.

This is probably what Phil was talking about when he said he had “special memories from Baltusrol in ’05″….?