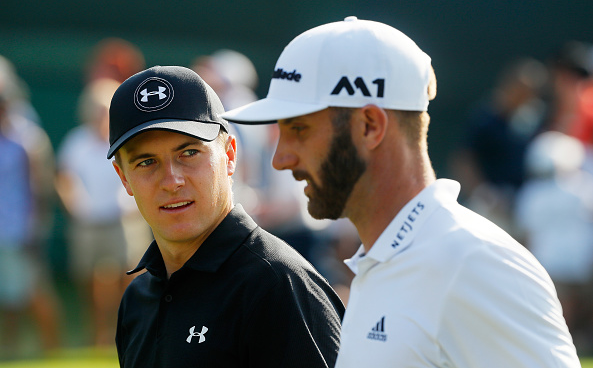 The 147th Open Championship gets underway in less than four days at Carnoustie Golf Links, with the first practice rounds set for Sunday, July 15. And the question many golf fans are asking is: “Who is the favorite to win the Open Championship – who’s going to be standing in the winner’s circle as the Champion Golfer of the Year, holding the Claret Jug, come Sunday night at Carnoustie?”

Well, with ample time between now and the first tee time next Thursday, let’s take a look at the favorites in the field for golf’s oldest major championship.

According to the odds makers, world No. 1 Dustin Johnson is listed as the slight favorite to be hoisting the Claret Jug next Sunday. DJ is offered at 11-1.

The 33-year-old’s legacy may be dependent on winning a couple more majors (he has just one), and he has the confidence and game to make this year’s edition of the Open Championship No. 2 on his resume.

Right behind DJ is Rory McIlroy, who’s been given 12-1 odds to win his second British Open title. While Rory has been frustratingly inconsistent, one reason to like his chances at Carnoustie – where every shot between tee and green requires careful placement – is that Rory is ranked 10th in SG: Tee to Green.

Despite a winless season – his worst since turning pro, defending champion Jordan Spieth is still given the respect he deserves as a three-time major winner. The 24-year old Texan is listed next at 16-1. Having come down with a puzzling case of the yips in 2018, Spieth is drawing the least amount of confidence that he’s ever had going into a big-time event. Still, he’s Jordan Spieth, and he’s going to bust this slump soon.

Also at 16-1 is world No. 3 Justin Rose, who’s enjoyed another stellar season, highlighted by two wins, including a WGC event. Rose’s most recent of those victories was a 20-under slaughter at the Fort Worth Invitational, where he gained an incredible 15.8 shots on the field tee-to-green.

The Englishman looks like a guy who can contend absolutely anywhere. He might be the safest bet in the entire field. Rose finished T12 the last time the Open was contested at Carnoustie (2007).

Rickie Fowler was a runner up at the Masters, and followed it up with a T20 at Shinnecock.

The newly-engaged star is under as much pressure as anyone in the field, still sitting at zero major championships at 29 years of age. Fowler has done everything else in the majors, especially as of late, where a T22 (The Open) is his worst finish in his last six starts, including three top 5s.

Is this finally his time? He would be a one heck of a popular winner.

While Fowler was a runner up at the Masters, Tommy Fleetwood was the same at the U.S. Open. The world No. 10, and reigning Race to Dubai Champion, is one of the best target hitters in the world – a key at Carnoustie, which makes him difficult to bet against in this event.

Jon Rahm, Justin Thomas, Brooks Koepka, and Tiger Woods round out the top-10 favorites at 20-1.

Place Your Bets on the 147th Open Championship at Bovada.