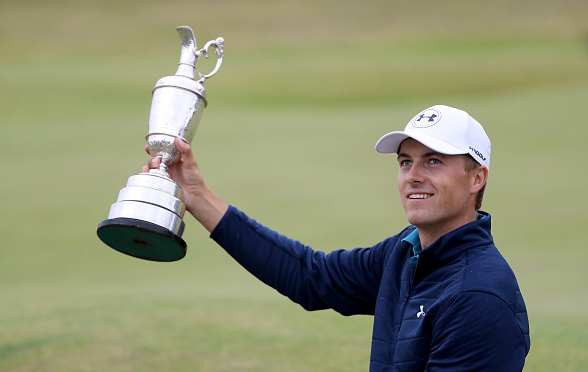 And the legend of Jordan Spieth grows.

In one of the greatest tales of resiliency in the history of major championship golf, if not in all of sports, Spieth survived a poor start; a disastrous 13th hole (that could have easily been a Masters 12th hole redux); lost his lead; and then absolutely exploded when he was at his lowest – playing his next four holes at 5-under to reach 12-under to become the Champion Golfer of the Year.

With the victory, Spieth now has three major championships, with only he and Jack Nicklaus taking three legs of the Career Grand Slam before the age of 24.

Holding a three-stroke lead to begin the final day at Royal Birkdale, Spieth’s win is the unsurprising result, but how it happened was anything what golf fans expected.

With an uncharacteristic three bogeys over his first four holes, just one fewer bogey than the number he had in his first 54 holes, this basically became a de facto match play battle between Spieth and Matt Kuchar by the fifth hole.

Then came the hole that would have lost the tournament for many. Tied with Kuchar on the 13th tee box, Spieth hit likely the worst drive of his professional life: a wicked slice that sent his ball careening 100 yards right and into a mound that Spieth said, after the round, he did not even know existed.

Despite a large crowd of spectators in the area, it took considerable time for the ball to even be found, and once it was, Spieth was forced to take an unplayable.

Then, in a 20-plus minute spectacle that had Spieth running around like a World Cup midfielder, an acceptable drop area was finally established, out by the driving range and behind some equipment trucks.

With a gutty seven-foot bogey putt, Spieth did phenomenal just to lose only one shot on the hole, but that embarrassingly public debacle, combined with a Kuchar par, had Spieth in second place for the first time all weekend.

Spieth walked up to the 14th tee box, a 201-yard par 3, facing the reality that he may have just lost this championship. Most golfers in his position would have imploded from there, but Jordan Spieth is not most golfers. To paraphrase Rory McIlroy’s caddy, he is Jordan Spieth.

He took a six-iron and hit an unbelievable tee shot that was an inch from being a hole-in-one. He tapped in for birdie, but did not take his foot off the accelerator, sinking a 60-foot eagle putt on 15, a 40-foot birdie putt on 16, and then another birdie on 17 to suddenly go 5-under in a four-hole span, immediately following one of the worst holes of his life.

His lead swelled back up, and a two-foot par on the final hole was all Spieth needed to clinch his third career major championship, finishing off the field in the most unfathomable of circumstances.

Just four days from his 24th birthday, Spieth continues to amass a resume that compares favorably, and then some, to the all-time greats.

He is the second-youngest player to win three separate majors, and in just a few weeks, has an opportunity to become the youngest all-time to win the Career Grand Slam, a record currently owned by Tiger Woods.

Capturing the Claret Jug is enormous for his public perception too, as it should quiet those who have been wondering what is “wrong” with Spieth over the past two years. This win re-validates Spieth as the world’s best golfer.

The round of the day, at least in regards to score, came from a surprising place: 21-year-old Hao-Tong Li. Li has played well on the European Tour this year, but this performance puts him on the map for Americans as well.

Li shot a bogey-free 7-under 63 which included seven birdies over his final 11 holes. He jumped 26 spots on the final leaderboard, finishing in solo-third place.

Matthew Southgate finished off a tremendous weekend, following up his Saturday 67 with a final-round 5-under 65 to finish T6 and become the tournament’s low Englishman.

Matching Southgate’s 65 was Marc Leishman, who was bogey-free, and also led to a sixth place finish. The 2015 co-runner-up, Leishman shot three rounds in the 60s, struggling only in tough round two conditions, where he posted a 6-over 76.

Closing with a 66-65, Leishman was the low golfer of the weekend.

The worst round of the final day came from a surprising place: world No. 1 Dustin Johnson.

Jumping onto the periphery of the leaderboard after a third-round 64, DJ started his final round double bogey-bogey and never recovered. With just one birdie on the day, he posted a 7-over 77 and plummeted 47 spots down the leaderboard, into a tie for 54th.

Another man who struggled to re-capture Saturday glory was Branden Grace, whose third-round 62 set an all-time major record. Proving yet again how difficult it is to follow up an incredibly low round in a major, Grace was 8 strokes worse on Sunday, finding little good during an even-par 70.

Hideki Matusyama shockingly took out a driver on the first hole and then walked off the green with a triple-bogey to take away any prayer he had early. The world No. 2 shot a 2-over 72 to finish at -2 for the tournament, two strokes out of the top 10.

Austin Connelly, the 20-year-old Canadian, had a phenomenal week, finishing T14 in his first career major, and playing in the penultimate final rounda pairing, but Sunday just was not his day. Five bogeys and a double overshadowed a four birdie in five holes stretch on the back nine, leading to a 3-over 73, and a drop of 11 spots on the final leaderboard.