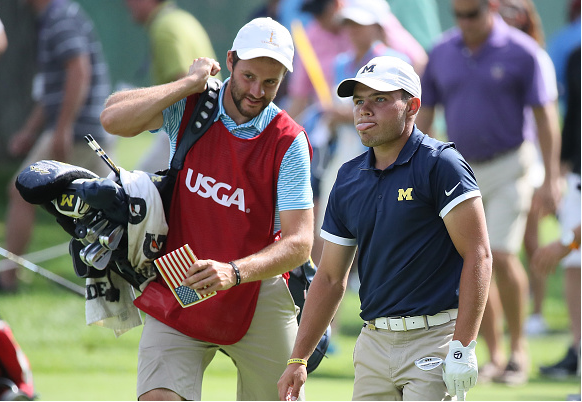 Yes we know this space is generally reserved for pro golf news and notes. But there’s an exception to every rule. And in this case, it’s well deserved.

Nick Carlson, an undersized, fiery sophomore from the University of Michigan, was ranked No. 1,981 in the the World Amateur Golf Rankings before he arrived at Oakland Hills Country Club to play in the 116th U.S. Amateur Championship.

Yet when the dust settled, and Carlson finally bowed out in a playoff in the semi-finals (final four) against No. 7 ranked Curtis Luck, Carlson had knocked off the reigning champs of both the British and Western Amateurs, and in the process became a cult hero with golf fans in Michigan and across the Internet. Thanks to video clips like these.

After his loss, Carlson was appreciative of the experience, saying, “I was able to stand on that 12th green after Curtis (Luck) won and just think to myself how amazing it was that they (Michigan golf fans) were all there. Someone told me yesterday that their ticket sales were up because of me, and that’s pretty incredible to me.”