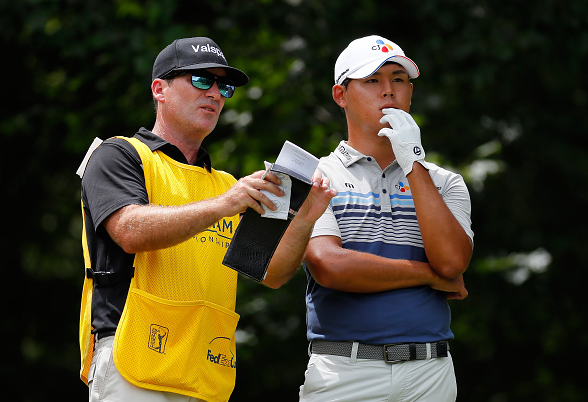 Last month, Jhonattan Vegas found out just how difficult it is to follow up a 60. At the Barbersol Championship, after a day in which he had 8 birdies, two eagles, and could not miss, Vegas birdied three holes, and bogeyed four for a third round one-over 71, which caused a big tumble down the leaderboard.

Si Woo Kim was not about to let that happen to him at the Wyndham Championship. One day after he shot 60, and just barely missed his putt for 59, Kim kept his foot on the gas. With a nearly flawless card (he had one bogey), Kim tallied seven birdies on his way to a third round 64. He held the lead coming into the day, and still holds it coming out.

For the second straight day, Kim conquered Sedgefield with superior ball-striking. He hit 12 of 14 fairways, which was even better than he did with that in his round of 60. He also hit 15/17 greens in regulation, giving himself a lot of birdie putts. At -1.9 at strokes gained: putting, Kim left a decent amount of birdies out there, but still holds a four shot lead.

With a week to go before the FedEx Playoffs, one guy to suddenly catch fire was the guy who became a household name after an epic run through the playoffs in 2014: Billy Horschel. Horschel birdied four consecutive holes on the front nine, leading to a six-under 64.

Former U.S. Open winner Graeme McDowell matched Horschel’s 64, and comes into round four behind by six, which is not a huge number at a course that is playing this easy. Scott Langley shot a 62, the lowest round of the day. At 175 in the FedEx Cup standings, Langley will need at least another 62 tomorrow, and probably a few strokes south of even that.

Tumbling Down the Board

Lucas Glover, who shot a second round 61, found round three to be much more difficult than round 2. Glover shot a three-over 73, twelve strokes worse than last round.

Andrew Landry, who contended at the U.S. Open was also disappointing today, with an even-par 70. With so many low scores, it was enough for Landry to fall 26 spots down the leaderboard. He came into the week ranked 177th in the FedEx Cup standings, and will obviously need a much, much better effort tomorrow.

Three times in the last five years, five golfers played themselves into the playoff Wyndham Championship. Through three rounds, just one man is currently projected to do that: Kyle Stanley, who at -10 has moved from 127th in the standings to 116th. He is not safe yet, but will have a tremendous shot at extending his season.

On the other side of that, Whee Kim and Matt Jones are projected to have played themselves out. Both missed the cut and will need others to drop to stay alive.

“I’d say the last four rounds I’ve played three really good ones. Hartford was a little inconsistent on Thursday and Saturday, but I played great on Friday and Sunday. I’ve been striking the ball real well, I’ve been hitting a lot of fairways, my short irons have been very good, and have given myself a lot of looks at birdie. Quite a few days, I’ve been able to capitalize on that and shot some good scores.”
–Jim Furyk speaking on the state of his game