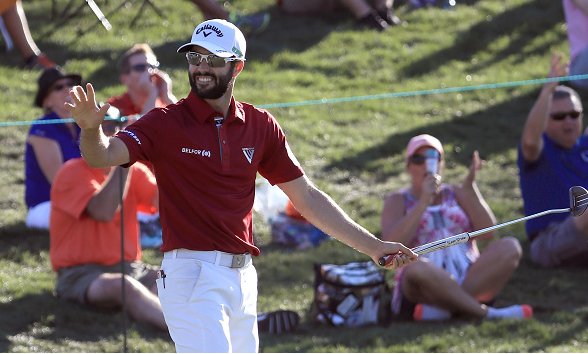 Adam Hadwin joined the 59 Club earlier this year, and now is close to crossing another item off his golf bucket list: winning a PGA Tournament.

A one-stroke leader after 36 holes at the Valspar Championship, Hadwin had another fine round on Saturday at Innisbrook, shooting a bogey-free four-under 67 to extend his lead to four after three rounds.

Playing in the final group with Hadwin tomorrow is former amateur superstar Patrick Cantlay, who is playing in just his second PGA tournament since 2014, and is in contention for the first time since 2011.

Cantlay had the low round of the day, a bogey-free five-under 66, to jump into solo-second, four strokes behind Hadwin.

On a day where hardly anyone was making birdies, Hadwin did tremendous avoiding bad holes, finishing his round with four birdies, 14 pars, and nothing worse. Hadwin has just four bogeys through three rounds, with three of those coming on Thursday.

Just one day after he had the best round in the field, Hadwin had the second-best round three score. He is also killing it on the greens, and is tied for second in the field in greens in regulation (72.2%). He has given himself a considerable margin of error going into Sunday, and if he again avoids the big numbers, it will be very difficult for anyone to catch him.

Making A Move Up

On the strength of his second consecutive four-under 67, J.J. Henry jumped from 20th into the top 5. A high finish for Henry would be a big relief as he is having a nightmare season, with just one finish in 11 events inside the top 40. The low point was likely last month, when he shot a round of +12 to open up the AT&T Pebble Beach Pro-Am, and promptly withdrew.

Tying Hadwin and Henry on the day with a 67 was defending champion Charl Schwartzel, who had six birdies to move up 25 spots on Saturday. The great round came in spite of missing fewer than half his fairways and hitting just 9 of 18 greens in regulation.

A bogey-six on the par-five 14th hole was the lone blip on the scorecard of Ryan Moore, who shot a three-under 68. Moore has been in a bit of a funk since his T3 at the year-opening SBS tournament of Champions, but sitting at T12 after three at Innisbrook, he is looking at a great finish.

A four-over 75 likely ended Tyrone Van Aswegan’s chance at his first career victory. He had just one birdie on the day to drop from 3rd to completely out of the top 10.

The biggest drop of the day came from James Hahn, who had the second-worst round in the field, a birdie-free six-over 77. Hahn looked great in his round one 65, but played poorly for the second consecutive day, plummeting 41 spots down the leaderboard.

Also shooting a 75, and dropping out of contention, with only one birdie, was Russell Henley, who started the day in a tie for fourth.

“The course is tough, so everything was working today. Everything was good; I hit a lot of fairways, a lot of greens. I tried to play smart, play to the middle of the greens and take my chances when I got them, on some of the fives. I rolled it well too, rolled a long one in on the last, which was nice.”
–Patrick Cantlay, whose 66 was the low round of the day.