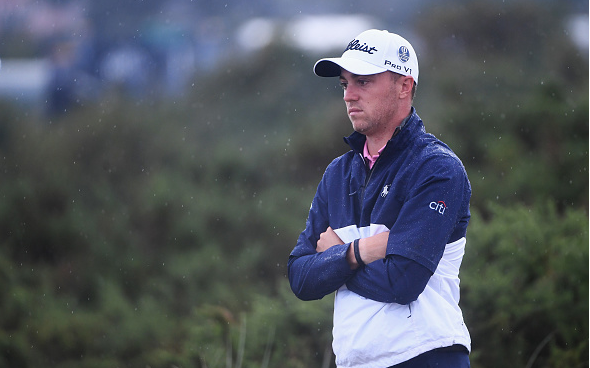 Now we may know why Justin Thomas hasn’t played anything like the golfer, who in a span of just seven tournaments, won three times along with three other top 10 finishes.

Following that epic run, Thomas went into a slump for much of the early to mid season, producing just one top 10. Yet, he seemed to be coming out of it in June with a top 10 at the Memorial, followed by a record-breaking 63 in the third round of the U.S. Open, which had him atop the leaderboard after 54 holes.

But ever since Johnny Miller talked like, well, Johnny Miller – the salty, acerbic golf analyst on NBC, Thomas has not been the same.

And it’s continued across the pond.

Following two rounds at Royal Birkdale, where he missed the cut, and made news for things unrelated to great performances – opening round attire, and second round 9(!), Thomas took to Twitter to mock Miller during Branden Grace’s 62 watch.

Johnny Miller about to go full Buffalo Wild Wings commercial on @BrandenGrace on 18. If you've seen the commercial, you get it #62watch

From the Tour Championship through the Sony Open in Hawaii, the young Thomas was lights-out unbelievable. But since, he’s been up and (mostly) down, and especially down as of late.

Since that 63 at Erin Hills, in his last seven rounds, Thomas has shot under par just once, including three straight missed-cuts. The aggregate score for those seven rounds is a mind-blowing 21-over!