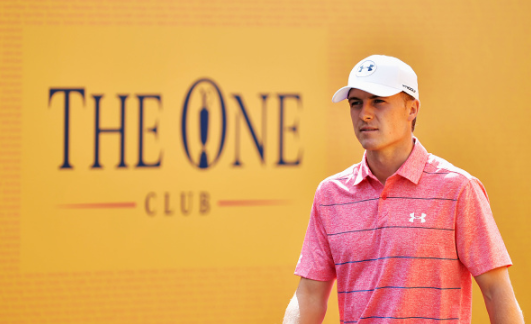 A new accomplishment for 23-year-old superstar Jordan Spieth might be his most impressive yet.

He was so good in round three of The Open Championship that he overshadowed the round fans had been waiting decades for: the first 62 in major championship history, courtesy of 29-year-old South African Branden Grace.

A fortunate bounce on Spieth’s 18th hole approach led to a tremendous final hole birdie and a bogey-free score of 5-under 65, and now the two-time major champion has a three-stroke lead on the field with just one day to go at Royal Birkdale.

Matt Kuchar missed a chance on his final hole to get within two, but as his closest competition, he will be playing with Spieth again on Sunday.

The best of the rest is the duo of U.S. Open Champion Brooks Koepka and surprising 20-year-old Canadian Austin Connelly, who both sit at -5, six strokes behind the man who could be less than 24 hours from completing the third leg of the career Grand Slam.

How Spieth Did It

Spieth’s bogey-free 65 was his second of the tournament, matching his, also bogey-free, round one total. He made the turn in 3-under, but after five straight pars to open up the back nine, Matt Kuchar was able to, very briefly, tied his lead.

A double-bogey from Kuchar on 16 brought the Spieth lead to three, but Kuchar birdied his next hole, and then an incredible approach shot on 18 threatened to close the lead to one, especially after Spieth narrowly missed a greenside bunker on his approach shot, leaving himself a long birdie attempt.

Spieth nailed his birdie while Kuchar missed his, and now going into Sunday, it’s a three-stroke lead for Spieth.

The torrid winds that typically define the Open Championship were conspicuously quiescent on Saturday morning, turning the early play into a free-for-all.

Shaun Norris, playing by himself in the first group of the day shot 65, and several other players matched.

Then, when Branden Grace had his turn, he played the front nine in 5-under 29, matching Matt Kuchar’s round one for the lowest opening nine of the tournament.

Grace had pars on the first four of the back nine, but then a birdie two on the par-3 14th got him to 6-under. A missed birdie putt on the par-5 15th allowed the 29 players in history with a major round 63 to breathe a little, but Grace was incredible down the stretch with a long birdie on 16 and then another one on 17.

Needing only a par to reach the magic number, Grace was able to two-putt from just off the green and become the first member of the major 62 Club.

After the round, Grace claimed that he did not realize he had shot 62 and was just focusing on finishing the round bogey-free. With the historically low round, Grace jumped from 45th place on the leaderboard to a tie for fifth place at 4-under, seven strokes behind Spieth.

Johnson stayed at 4-under through the turn, then birdied his first hole on the back nine, but the heat was largely extinguished with seven pars and just one more birdie, a four on the par-5 15th.

After a missed putt on the 18th, he finished with a 6-under 64, the second best round of the week.

Defending champion Henrik Stenson has not been in his best form over the past few months, but looked a lot closer on Saturday to the guy who dominated Royal Troon than he has any time this calendar year.

Three birdies apiece on both nines, including holes 1 and 2, jump-started Stenson’s chances to repeat, as a 6-under 65 moved him 18 spots up the board into a tie for sixth place.

A bogey-free 65 from world No. 6 Jason Day is going to have the former PGA Champion thinking “what if?”. Day was in the mix until he collapsed over the final three holes in round two, carding a double bogey-bogey-double bogey finish.

Day’s great Saturday moved him 45 spots up the leaderboard, and at even-par for the week, he’s in a tie for 16th.

The best Arizona State product in the field this week has not been Phil Mickelson (missed cut) or Jon Rahm (T44), but rather little-known Chan Kim, a 27-year-old who makes his living mainly on the Japan Tour. With a 3-under 67, Kim is in seventh place for the week, tied with DJ and Stenson.

Prior to this morning’s under-par explosion, the lowest round of the tournament had been 2015 Open Champion Zach Johnson’s second round 66. With everyone around him going low, Zach could not follow suit, and with only two birdies on the day, he shot a 1-over 71 and dropped from 20th to 40th.

Another player with a disappointing 71 was Englishman Ian Poulter, who had made big strides in his quest for a first major championship.

Poulter had four birdies on his card, but three bogeys in a row on 11, 12, and 13 realistically put an end to his championship chances.

The biggest drop of the day came from Gary Woodland. Coming into the day, he was at -1, but was very sloppy on Saturday with seven bogeys, including one after each of his three birdies. Woodland fell 37 places down the leaderboard after his 4-over 74.

How to Start and Finish

20-year-old Canadian Austin Connelly has been the biggest surprise of this tournament, making his presence known with a 67-72 in the first two rounds.

In round three, he put on a clinic about how to start and finish. Connelly began his Saturday with a birdie on 1 and an eagle pitch-in on the 2nd.

After playing holes 3-16 at 1-over, Connelly got hot again at the end, with birdies on both 17 and 18, to finish with a 4-under 66. Connelly is now tied for third, and will be paired with U.S. Open Champion Brooks Koepka in the penultimate Sunday pairing.

“It was phenomenal. I was very pleased with our tee-to-green performance, and I made some really nice par saves from 4-5 feet, but other than that, it was pretty stress-free, and on Saturday with the lead in a major, that’s about as good as I can ask for right there. It was really nice to get that one at the end, I got a really good break on my second shot to not be in trouble, and to make three there, it feels like I stole one or two going into tomorrow.”
–Jordan Spieth, 54-hole leader