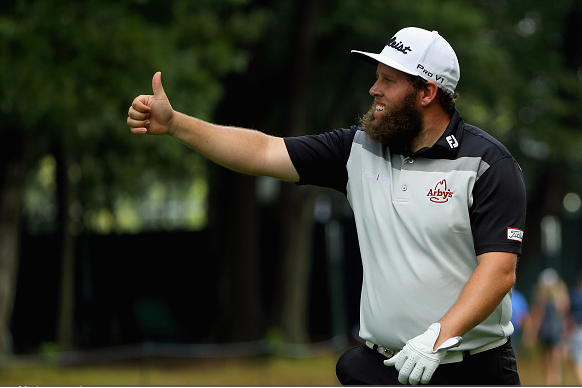 Andrew “Beef” Johnston shot a 1-under par 69 today at Baltusrol and is in the clubhouse at T27 (-1) after round two of the PGA Championship.

The newly minted golf star sat down for a post-round interview with the media. Here’s a transcript.

Q. Had it going for awhile and then good bounce back at the end, as well?

JOHNSTON: Yeah, I played nice. As I said, like yesterday, I didn’t putt great. I putted much better today. It was nice to finish that nine, 4-4, birdie the last two on that nine.

Then coming back, I didn’t do too much wrong. I’m trying to think of the bogey I made, I hit a putt and it was like on fire and it was so quick. I thought I actually hit a good one putt. I was actually being aware of the pace and it ran by. I misread the one coming back. As it went past the hole, my first putt went left and I looked at it, I’m like, it’s not much in, and I hit it pretty straight and it just went left and ended up horseshoing.

Q. You obviously couldn’t advance it very far, could you.

JOHNSTON: It was so buried. I didn’t even know how it was like going to come out. Then I was happy how far it went out, that lie.

Yeah, it wasn’t a terrible tee shot, slightly down the left side. Wasn’t too bad. I was like, all right. Just took my medicine, got off, and hit a nice shot into 8, and then a decent putt and played 9 well. Yeah, a decent day, man.

Q. Looking forward to the next two rounds?

Q. Talk about the crowd reaction to you here. You’re becoming one of the most popular golfers.

JOHNSTON: I love it. I love it, every hole, man, I get so many nice comments. Even after the fifth hole today, when I 3-putted it, they are like, “Don’t worry, Beef, come on, bounce back, you’ve got this one.” And it’s just nice, man. It’s a nice atmosphere.

Q. You touched about it on Wednesday, but you wanted to come here and play solid golf. All the attention you’ve got, all the distractions, you’ve played well here. You must be very pleased with how you’ve performed.

JOHNSTON: Yeah, it’s been good. Just got to try to make a few less mistakes tomorrow and then keep doing what I’m doing. I’m hitting the ball nice. Just got to cut out a few poor shots. But it’s golf and keep battling, man, as always.

Q. You say it’s going to get noisy tomorrow; it’s been pretty noisy, hasn’t it.

JOHNSTON: It’s been great, man. So nice to see, like the variation of people shouting, of like little kids, man, up to like grown men, grown women. It’s just great, man.

Q. How are conditions out there after the wet weather this morning?

JOHNSTON: It’s good. It changes so quick. Like yesterday, it was quite firm. Balls are releasing out on the greens. And now, you’re trying to work out, okay, man, I’ve got to hit this ten yards past the pin for it to spin back. So you’ve just got to be wary. That’s one thing I learned at Oakmont, and after that rain on Thursday, I didn’t adjust quick enough to it, and I kept coming up a bit short, so I was wary of it today.

Q. Was it a little easier to go after some of the pins now that it’s soft?

JOHNSTON: Yeah, I thought they tucked the pins a bit more today than yesterday, as well. So a few are up near the back, sort of back corners, and you don’t want to go out and get too greedy with it, even though you know it’s going to spin back. I thought it was all about trying to take some of the spin off a lot of shots, and not get it coming back too much. Because you could easily hit it a couple yards past and it takes one bounce and you’re in the rough and you’ve got a really difficult chip coming down the green.

Yeah, it was all about being careful and trying to pick your moments when to hit it.

Q. Could you see yourself basing yourself in America in the future?

JOHNSTON: You want to play the best tournaments in the world where you can. That’s the goal is to play the biggest and best tournaments, and they happen to have a lot of them here. I like coming over and that. So obviously if I’m in there more, I’m going to be over more. It’s quite straightforward.

Q. Bigger crowds, you seem to feast off crowds, so it would make sense.

JOHNSTON: Yeah, definitely. As I said, no matter where in the world, where the biggest tournaments are, they are the ones you want to go and play, whether it’s Australia, Europe, America, wherever it is, and I’ll be there, if I’m in.