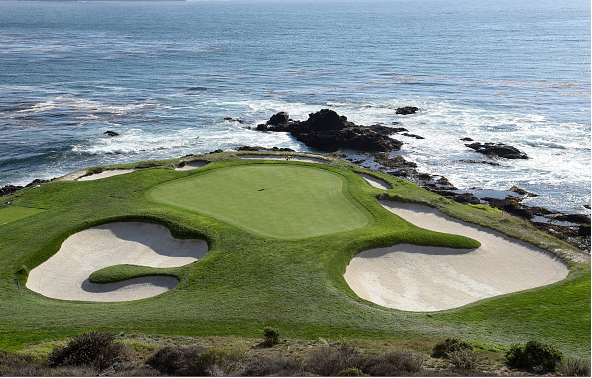 We asked around, and not surprisingly, most of them said they’d rather play the Par 3s.

It’s the Par 3s that add character to the golf course, usually acting as the signature hole. More often than not, the Par 3s are the ones which are the most picturesque and sometimes they’re even the most challenging.

Here are some ofurse the most scenic and famous Par 3s in the world.

Ayrshire, Scotland
The biggest change Donald Trump has made since he bought Turnberry in 2014 is converting the 9th hole from a Par-4 to a Par-3. It plays to around 245 yards now with a forced carry over “water, rocks and waves.” The famous Turnberry Lighthouse is being restored and will serve as a backdrop to the green.

Pebble Beach, California
The carry over the Pacific Ocean makes this Par 3 one of the most challenging holes in the world. As if the daunting tee shot isn’t enough, the green is well protected by bunkers, but there is a bail-out area on the left. No, wonder Alister MacKenzie originally designed this hole to play as a Par-4.

16th at the Royal Course

Vale do Lobo, Portugal
One of the most photographed holes in Europe is also perhaps the most unaccommodating hole, there is no leeway. This par 3 requires a carry of over 220 yards, from the back tee, over a cliff with deep ravines.

St. Andrews, Scotland
One of Scotland’s most famous holes, this par 3 can play more nearly 250 yards. Not only is this hole surrounded by the water on three sides, the wind can cause plenty of havoc on this hole. The green sits on small patch of land projecting out into the ocean.

Pebble Beach, California
Pebble Beach Golf Links is home to some of the most scenic holes when it comes to golf, one of them is the 7th. This downhill par 3, which plays to a 106 yards, looks very easy but surely isn’t. The green sits on a cliff surrounded by the ocean on three sides and is protected by six bunkers.

Southampton, Bermuda
The par 3, 16th , is the signature hole at Port Royal. From the championship tees, the hole can play 235 yards, with the tee shot required to carry across the ocean to a green set high above the water. The PGA Grand Slam of Golf was played at Port Royal from 2009 – 14.

Alberta, Canada
Called the “Devil’s Cauldron,” the bowl-shaped green at this par 3 is more than 70 feet below the tee protected by a glacial pond, which wasn’t a part of the original design. Set in the foothills of Mount Rundle, this par 3 is the most famous hole in Canada.

Augusta, Georgia
Widely regarded as the most intimidating par 3 in major history, the 12th at Augusta has caused more heartbreaks than any other par 3 in the world. It’s just a 155 yards, but the green is extremely shallow and well protected by bunkers in the front and back. The slopes that lead to the Rae’s Creek in the front of the green are deceptively steep.

Inverness, Scotland
This par 3 plays not more than 175 yards but is quite a test. The elevated tee plays to the green, by the beach. This hole demands great accuracy as it’s surrounded by trouble all around. There are bunkers short and to the right of the green, while to the left and the back is the beach.

Ponte Vedra Beach, Florida
No par 3 list can ever be complete without the mention of the 17th hole at TPC Sawgrass. Although it’s a peninsula, the green is still called the “Island Green”. It plays no more than 140 yards at most, but it’s the wind and the intimidation which takes its toll on the players.

Limpopo, South Africa
The most famous 19th hole in the world is definitely not a breeze. It involves hopping on to a helicopter, flying up a hill about 400m and playing a par 3 which is nearly 395 yards long, to a green built in the shape of Africa. There’s also a $1,000,000 prize for the first player to hit a hole-in-one.