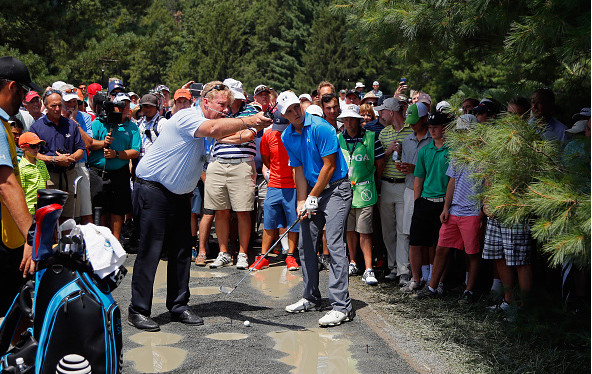 Round number two of the PGA Championship at Baltusrol is in the books. Jimmy Walker and Robert Streb are tied for the lead at 9-under par. Walker followed up his first round 65 with a 66 today. While Streb seemingly came out of nowhere to shoot a 63. Jason Day and Emiliano Grillo are tied for third at 7-under.

Here’s a round up of quotes and photos from some of the more notable players.

“Solid day, a lot of good shots. Right from the get go, just kind of kept the ball underneath the hole. Hit quality shots. Made a couple nice, long putts in the middle of the round that kind of — not say jump started, but just kept it going. I was real happy with the day.

Couple loose swings coming in, no big deal. Little quick. But the finish was — wasn’t what I was looking for, but it’s fine. I think you take 66 at any tournament all day every day. So it’s good.”
Walker, T1 at -9

“Yeah, yeah, it was definitely softer out there. The greens were a little bit more bumpy because of the rain, of course.

I think I played very nice today, especially off the tee. Made some good putts on the front nine and I was able to hang on on the back nine. Shake off the bogey on the 8 and it was a good round after yesterday’s round. My game is right there. I’m making — I made some good putts yesterday and today. Going to be an interesting weekend. I’ve never been in this situation, and I’m not afraid of it. I’m going to go out and enjoy it.”
Grillo, T3 at -7

“I’m very happy to be able to follow up the success at Troon with a couple of strong rounds here and be in good position. We know it’s a marathon, not a sprint. It’s all about being there for Sunday afternoon, and so far, so good. You’re not winning anything on a Thursday and a Friday, but you can put yourself in the wrong direction early days. So happy with that, and yeah, I think I played some great shots out there, and maybe a few that wasn’t so great.

But all in all, I’m very pleased with that round today. Probably even more so than yesterday, I would say, because the start wasn’t great, and yeah, things weren’t looking great after four or five holes. So I could have easily gone the other way, but I managed to turn things around.”
Stenson, 5th at -6

“I’ve been fighting kind of pulling a couple of those shots, where I’m hitting them soft, and I knew there was no error left on that hole. I just had to step up and make a solid golf swing. Hit a great one, and yeah, I couldn’t really see where I ended up or where it landed. So I just thought it might have been on the green because not a single person clapped.

So I walk up there and I realize it’s a foot and I was just like, okay, I guess the rest of the field has been hitting it inside a foot all day. Didn’t get a single clap and it’s in there tight.

Any time you can hit them like that, especially with missing a short putt on 7, you felt like you gave one back there. I felt like I gave one back on 3 for a 3-putt. You know, going into 9, knowing that you need to close off your round right, you don’t want to just limp in. Hitting a quality shot like that is definitely good momentum going into tomorrow.”
Reed, T6 at -5

“I started not the way I wanted, to be honest, even though it was very tough today. I started with a couple of bogeys the first three holes. I knew I didn’t need to worry too much. I hit the ball fairly solid. It was just a matter of time that I create birdie chances, and they came. I couldn’t make all of them, obviously, but in the end it was very important for me to finish the way I did, to still shoot under par round or under those conditions because the golf course was definitely a little bit harder to play today.

I think I placed myself in a very good spot. Who knows where the leader is going to be by the end of the day. I shot a good score yesterday, a very good round today. So it’s a good position to be in in a major championship.”
Kaymer, T6 at -5

Finally, on the last one, it went into a location more straight back in line with the hole where I could then have a stance in line with the hole that would not be in casual water. I then altered my stance to play a different shot than what I would have played had it been on the original angle of my drops. Because of that, he said we were following the correct rules and we were taking relief. I was just altering the stance with a toe that was up. It wasn’t resting in it because it was on the cart path and it was dug down. I say cart path, it’s that gravel. So the waters dip down. So my toe wasn’t on the water, I don’t know if it matters or not, but it was certainly hovering over it. It was a different angle in flight at the right of the green that he said was appropriate. So I trust my rules official there.”
Spieth, T13 at -3

“Yeah, I played nice. As I said, like yesterday, I didn’t putt great. I putted much better today. It was nice to finish that nine, 4-4, birdie the last two on that nine.

Then coming back, I didn’t do too much wrong. I’m trying to think of the bogey I made, I hit a putt and it was like on fire and it was so quick. I thought I actually hit a good one putt. I was actually being aware of the pace and it ran by. I misread the one coming back. As it went past the hole, my first putt went left and I looked at it, I’m like, it’s not much in, and I hit it pretty straight and it just went left and ended up horseshoing. Just took my medicine, got off, and hit a nice shot into 8, and then a decent putt and played 9 well. Yeah, a decent day, man.”
Johnston, T33 at -1