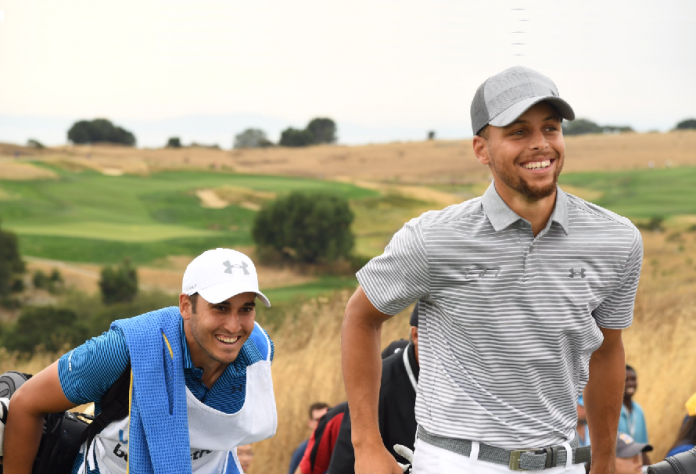 In this week’s installment of Around the Tours, we recap another week chalk full of great shots, performances, and storylines.

On the European Tour

The best performance on the European Tour this week came courtesy of Hideki Matsuyama’s record-tying, final-round at the WGC Bridgestone Invitational.

Matsuyama tied the course’s low-round of 61 Sunday, joining three other players to do so, including Tiger Woods who did it twice. He would finish the tournament at 16-under, five shots better than the 2nd place finisher, Zach Johnson.

The Japanese phenom also broke Tiger’s record of most birdies made at the Bridgestone Invitational with 24.

Relive Hideki Matsuyama's final round 61 in under four minutes pic.twitter.com/xObquqzJex

On the PGA Tour

Over on the PGA Tour, one ace wasn’t enough to satisfy spectators in the opening round at the Barracuda Championship this week. The first hole-in-one came from Jay McLuen on No. 11 from 148 yards out.

Since it was McLuen’s first ace, he respected the age-old tradition and bought beers all-around for the clubhouse media personnel.

The second ace on the day came from J.J Spaun, who had more to cheer for than just a gorgeous shot. The 26-year-old holed in from 208 yards out on the par-3 16th. The shot also landed him a brand-new RC F Sport Lexus.

Aces are sick but getting a Lexus with it too?! Damn I'm lucky https://t.co/5M7wrZYVEm

This hole-in-one helped him get there. pic.twitter.com/sooJytzzxC

On the LPGA Tour

Over on the LPGA, Moriya Jutanugan had a great birdie save in the third round of the Ricoh Women’s British Open. Fighting off the windy conditions, Juntanugan chipped in on the par-5 second hole after flying the green.

The shot would propel her to a third-round score of 67 (3-under) and eventually a T16 finish at the tournament.

The best performance on the LPGA belonged to South Korea’s In-Kyung Kim who dominated all weekend, never relinquishing her lead after day two.

Kim let everyone know she was looking to finish business after flying an absolute dart on the opening hole of the final round. Leaving her tee shot within a foot from the hole, Kim would birdie and go on to win her first ever major.

On the Web.com Tour

The top shot I saw this week from the Ellie Mae Classic came courtesy of Cameron Wilson. The Stanford graduate played a beautiful third shot out from the rough and down the slope on the par-5 3rd hole. Wilson’s hole-out eagle would later lead to his best finish of the season at T20.

Finally, the best thing I saw from the Web.com Tour this week was Stephen Curry’s pro golf debut. Personally, I enjoy watching other athletes try and compete in their non-professionalized sports and wish more would do so.

For the most part, it can be a humbling experience, but this week Curry humbled anyone who has ever picked up a golf club. Myself and many others ate their words when predicting what Curry would end up shooting this week.

Back-to-back 74s wasn’t anything to go crazy over, but it was damn sure impressive on a tour setting and especially for someone who doesn’t play every single day.

Curry understood his situation as well, never taking away from the Ellie Mae Classic or the other golfers. His ability to compete on the professional golf level and his overall respect for the game earns himself my hat-tip of the week.