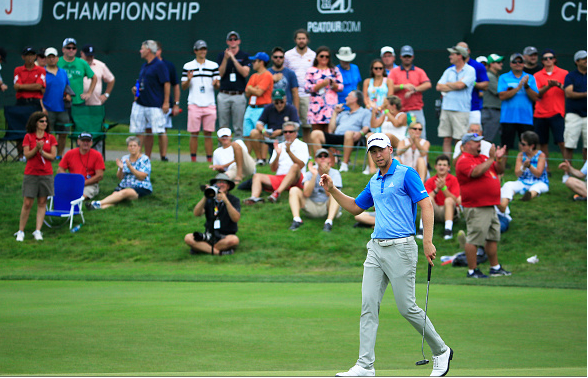 FedEx St. Jude winner and reigning tour rookie of the year Daniel Berger had a loud message for the rest of the Travelers Championship field on rushed Saturday: “I’m back!”.

Berger had not really gone anywhere, but a tremendous season had come to a halt over the past month-and-a-half as he was nursing an injured shoulder. He famously withdrew from the WGC Bridgestone after one $50,500 stroke, missed the Open Championship, and still did not quite look himself during a T73 performance at the PGA Championship.

After a sizzling 8-under 62 in round 3 at TPC River Highlands, Berger has removed all doubt about the state of his game. A -15, he leads Russell Knox, Tyrone Van Aswegen, and Russell Henley by three strokes.

On a day where tee times were moved up to eschew a storm system coming into Connecticut, Berger was the only player near the lead after round 2 who looked comfortable during the compounded round. Henley and Van Aswegen found their games on the back nine, which has been playing easier than the front nine, but by then, Berger was way ahead.

Berger had nine birdies on the day, going out in 3-under and then back in at 5-under. His 62 is the low round of the week. For the week, Berger leads the field in birdies, shots gained: approach to the green, and shots gained: tee to green. For a second straight day, the 23 year old put on an accuracy clinic, and is in the midst of a 36-hole streak where he has hit 32 greens in regulation.

A Nightmare for the Ryder Cup Captain?

With the Ryder Cup just a short time away, these late season tournaments are critical for those on the Ryder Cup bubble, which feels like just about everybody. With just eight spots available for automatic qualifying, the #5-#12 spots showcase a tight battle between the following Cup hopefuls (in order): Brooks Koepka, Zach Johnson, J.B. Holmes, Brandt Snedeker, Bubba Watson, Patrick Reed, Matt Kuchar, and Rickie Fowler.

American Captain Davis Love III gets four captain’s picks, which right now, sounds perfect. The automatic qualifies will get sorted out, and then Love can just pick the four very qualified golfers who didn’t qualify automatically. Easy, right? Well, not with Daniel Berger forcing himself into the picture.

Berger sits at #18 and can rocket up further if he holds on at The Travelers. Love is facing a scenario where he would have to exclude a phenomenal player. It is entirely possible that at least one of the four on the U.S. Olympic team (Watson, Reed, Kuchar, and Fowler) will not make the Ryder Cup team. It is a decision nobody will want to make.

There are dozens of player on the bubble, and this will likely come down to the last week. Right now, former FedEx Cup champion Jim Furyk would be one of the first out.

While Rickie Fowler is living it up in Rio, partying and taking selfies with Michael Phelps, the other three members of the Olympic team are in Connecticut. Through three rounds, Bubba Watson, who is also the defending champion and all-time earnings leader for the Travelers, and Patrick Reed are tied for 22nd place, which is an astounding 10 strokes behind Berger.

Kuchar struggled in round 3, putting up one of the very few over-par scores (+1). He was terrible tee-to-green and managed just one birdie to three bogeys on a back nine that most of the field is carving up.

“I’ll tell you, it’ll be a lot easier stepping up on the tee box having a PGA Tour win under my belt than if I didn’t. You know, it’s all about hitting good shots under pressure, and I’ve been doing that so far this week. If I can continue to do that, then I’m sure I’ll be right there on Sunday.” ~ 54-hole lead Daniel Berger talking about his level of confidence going into the final round