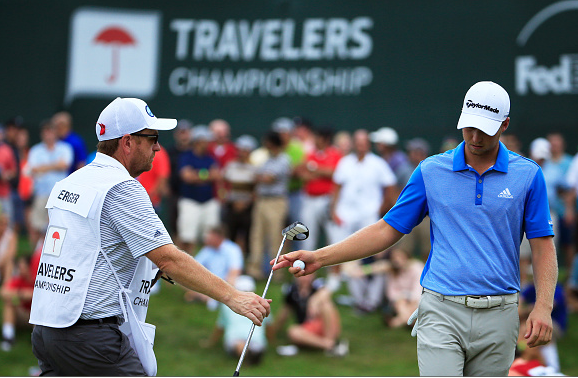 Daniel Berger fired an 8-under 62 on Saturday to pull away from a bunched up leader board. Berger, who captured his first PGA Tour win at the FedEx St Jude’s Classic, holds a 3 shot lead heading into Sunday’s final round.

Tyrone Van Aswegen, Russell Knox, and Russell Henley are all at 12-under, and tied for 2nd place.

Here’s a round up of quotes and photos from some of the top players on the leaderboard following round number three.

“It feels great. I guess I’ve shot better than 62, but I guess it doesn’t matter unless it’s on the PGA TOUR. It was just a great day, and I feel like the group really got off to a hot start on the back nine, and we just kind of carried it into the last hole… I’ve just got to go have some fun. For me it was only two tournaments ago, but really it was seven or eight weeks ago. Just going to do what I’ve been doing the last couple days and hopefully make a few putts, and that’s all I can do.”
-Daniel Berger, 1st at -15

“I wasn’t having too much fun after the first hole (bogey), but I was really nervous starting out. I hit a bad tee shot, made a bogey. But came back nicely on the back nine… You know, when there’s this tough a pressure, you get a little quick, and that’s my tendency. Just find a rhythm, and it got better after that… Daniel (Berger) was holing a whole bunch of putts and we started to follow, and I think there’s definitely a momentum factor that comes into play.”
-Tyrone Van Aswegen, T2 at -12

“Yeah, I played beautifully. I had loads of chances. Obviously I made some, which was great. I missed a couple, but to finish with a birdie left a good taste in my mouth… I felt great. I felt positive. I had good kind of rhythm to my play, had some great yardages there. Yeah, I just went for it. Aim at the pin, you might hit it there… I drove the ball very well. My iron play was terrific at times, and I managed to hole a few putts. All in all, I’m very pleased with my position.”
-Russell Knox, T2 at -12

“I felt really in control. I felt like I was mentally sharp out there. I didn’t leave myself in too many spots where I could make a mistake, so that was nice. It was a pretty stress-free day. Obviously I saw scores were low out there and the leaders were pushing, so I tried to push as hard as I could and didn’t get as many as I needed there towards the end of the round, but I’ve got a chance for tomorrow, and that’s all I can ask for.”
-Patrick Rodgers, 5th at -10

“It’s not fun anytime you’re sitting at home and the guys are playing, especially in a major. But it feels all right. Every day is better and better. I’m doing things off the golf course, rehab, doing everything every day. Just keep doing what I’m doing, it’s fine. Any time you play good, it feels a little better… I’m itching to get out, too. It actually was a really good break. I feel really mentally recharged. It’s nice to be truly excited to be out here, and every time you’re playing a hole, you’re excited, you can’t wait to go hit the next shot, and that’s kind of how it is right now.”
-Brooks Koepka, T6 at -9