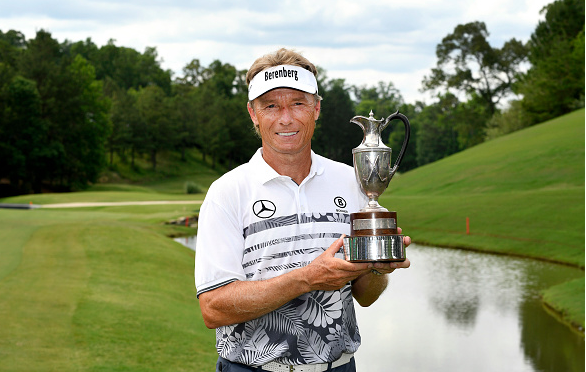 Bernhard Langer fired an 8-under par 64 at Greystone, and pulled away from the pack to win the Regions Tradition – his eighth major on the Champions Tour, tying Jack Nicklaus’ record.

Langer and Funk began the back nine tied at 16-under, and the turning point came on the par-4 12th.

Funk, the most accurate driver on PGA TOUR Champions, hit his tee shot out of bounds and went on to make triple bogey. Meanwhile, Langer made a 16-footer for birdie and moved to 17-under.

The four-shot swing gave Langer a three-shot lead over Scott Parel with six holes to play.

“Yeah, that’s pretty neat. Not many people can say they match Jack Nicklaus in anything. To have won as many majors on this Tour as he has is outstanding. Obviously and a thrill for me. I’m still way behind on the (PGA TOUR), though, in majors.”
–Bernhard Langer, 2017 Regions Tradition Champion