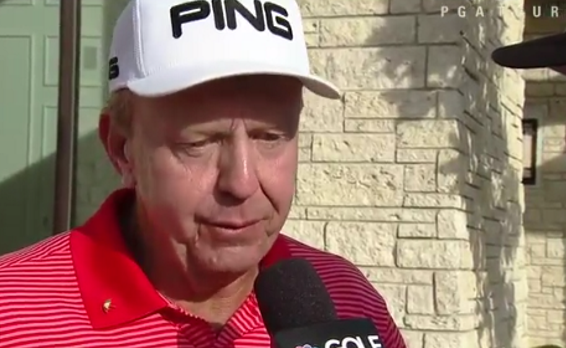 Billy Mayfair shot a 7-under 64 during the first round of the Toshiba Classic at Newport Beach CC. The senior tour rookie is tied for the lead with Jay Haas. A trio of Larry Mize, Paul Goydos, and Michael Allen are tied in the third spot at 6-under par.

Beautiful touch from the leader. https://t.co/19HhUNSDcD

After his round, Mayfair stopped by to talk with the Golf Channel. Following a quick recap of how his day went, the interview delved into Mayfair’s connection to two of the most iconic golfers in history, Tiger Woods and Arnold Palmer – who both led the news cycle this week.

Mayfair discussed his distinction as being the only golfer to ever beat Tiger Woods in a PGA Tour playoff (1998 Nissan Open L.A. Open), and he wished Tiger well on his comeback, with the hopes that his distinction remains.

The conversation then dovetailed into his experience playing with Arnold Palmer at the 1988 Masters Tournament, where Mayfair, the ’87 U.S. Amateur champion, was paired up with The King of golf during round number two. Both shot a 77 on that day, and missed the cut at Augusta National. But Mayfair got emotional recalling how Arnie waived him up to the green on 18 and put his arm a then unknown amateur golfer.