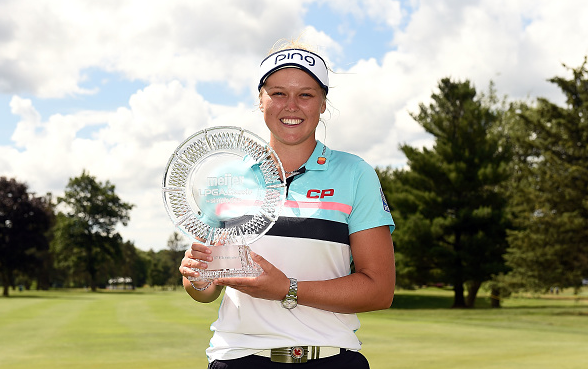 A paragon of parity, the LPGA Tour has now had 15 different golfers win the 15 events that have been held in the 2017 season.

This week’s new winner? Brooke Henderson, a 19-year-old from Canada who emerged from a crowded leaderboard in Grand Rapids, Michigan, to claim victory at the Meijer LPGA Classic For Simply Give.

A final round 3-under 66 (flooding changed par mid-tournament) allowed Henderson to reach -21 for the week, which was two strokes better than notable Americans Michelle Wie and Lexi Thompson.

.@BrookeHenderson goes bogey-free on her final round to win the @MeijerLPGA! See how she was Up To The Challenge in these highlights: pic.twitter.com/nON4CmRGrw

“It was really tough today. To shoot 3-under and I don’t think I had any bogeys today either, which was great. The wind really picked up. I was kind of surprised when I looked at the leaderboard and I had a two-shot lead on the 18th green. Super happy and I’m just glad it’s done and I finally have my fourth win.”
–Brooke Henderson