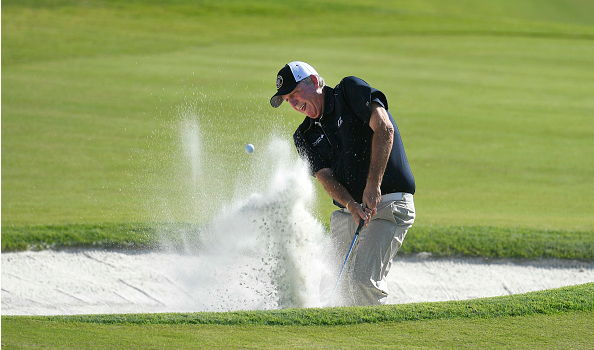 Mark Calcavecchia shot an opening-round 64 and leads the Boca Raton Championship by one-stroke over Rocco Mediate and Jeff Maggert. 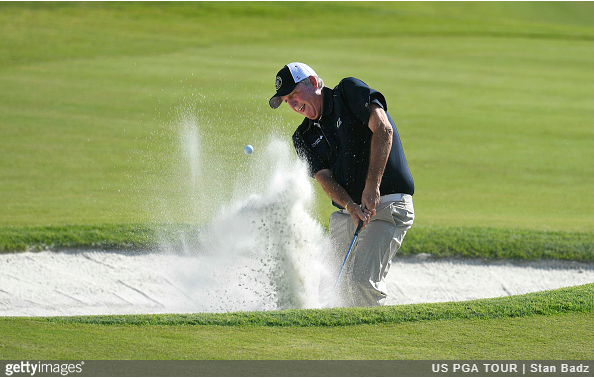 Calcavecchia finished bogey-free with eight birdies, including six on his first-nine at The Old Course at Broken Sound. The 18-hole lead is the first in four years (2014 Principal Charity Classic) for the 57-year old Floridian.

Mediate’s round was highlighted by an eagle on the 275-yard par-4 seventh hole which he called “accidental.”

“Just a 3-wood, rolled it on there and made about a 30-footer,” described Mediate. “One of those ones you’re trying to two-putt and oops. Accidental, totally.”

The 2013 Boca Raton champion also carded six birdies and one bogey en route to a 7-under 65 to sit T2 alongside Maggert.

“The golf course is perfect. Besides the two guys [Maggert and Kirk Triplett] I played with today, it was a great day,” said a smiling Mediate.

“Oh, he’s over there. We had a ball. I screwed up because if I had made the putt at last, none of us would have made any bogeys, but of course I’m the one who screwed up, yeah, of course I did. He had to remind me of that, too. Fun day.”

One further back at 6 under par was the trio of Bernhard Langer, Fred Funk and Jesper Parnevik.

John Daly headlines a logjam of eight players at 5 under.

Jesper Parnevik with a hole-out eagle on the par-4 13th. “He takes a lot of Florida with every swing too,” says Lanny Wadkins.

“I started exercising in December, which helps. Started a class called Orange Theory, which Brenda and I are doing that. I don’t look much different but I feel a lot better.”
– Mark Calcavecchia