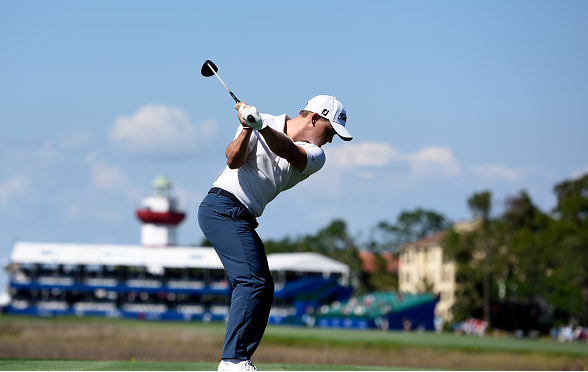 Those who are still disoriented from Sergio Garcia’s stunning victory at The Masters last weekend would be well served looking at the leaderboard of this week’s RBC Heritage, where they can be comforted in seeing that some things never change.

Former #1 in the world Luke Donald, who has finished in the top three in six of his last eight attempts at Harbour Town without a victory (four 2nds, two 3rds), sits in a tie for second after the first round of the RBC Heritage.

Despite not even qualifying for The Masters this season, he again finds himself in the early mix in Hilton Head. His six-under 65 was surpassed by only Bud Cauley, who shot a bogey-free eight-under 63 to lead Donald, Graham DeLaet, and Sam Saunders.

Bud Cauley had two birdie spurts over his first 18 holes, starting with three on the first five holes, and then after a long string of pars and one birdie, he finished with birdies on 14, 16, 17, and 18 to get to -8 for the day.

Cauley had no trouble finding Harbour Towns famously small greens, hitting 17 of 18 greens in regulation, the best of anyone in the field. He also tied for the lead in driving accuracy, hitting 12 of 14 fairways.

It’s a very promising start for a man who has mostly struggled this season, missing seven cuts in 13 events, including his past two. He has finished in the top 40 in just two of those events, a T3 at the CareerBuilder Challenge, and a T27 at the Honda Classic, the latter of which occurred in February and was the last tournament he finished under par.

Defending champion Brendan Grace started where he left off in 2016, carding five birdies against just two bogeys to shoot a three-under 68, which currently has him tied for 19th.

Ian Poulter has not been on many PGA leaderboards in recent years, but held up extremely well over his first 18 holes, with a lone birdie on the first, and then six birdies over his last 17 holes to shoot a five-under 66, putting him in a tie for fifth place. Poulter struggled off the tees, hitting just six of 14 fairways, but still gave himself birdie chances with a great iron game. Poulter has not finished inside the top 35 of a tournament since a T17 at the season-opening CIMB Classic in October.

Joining Poulter at -5 was Northern Ireland’s Shane Lowry. Lowry has not found much success on the PGA since blowing a large third round lead at last year’s U.S. Open, but was able to put his doubts aside today, carding seven birdies on his round. Lowry did his best work on the greens, ranking second in the field in strokes gained: putting.

Spain’s Rafa Cabrera-Bello is officially in a slump. He was tremendous in 2016, but after a three-over 74 where he dropped five strokes in a six-hole midround span, Cabrera-Bello again finds himself near the bottom of the leaderboard, the same place he found himself at The Masters last week (missed cut) and the Shell Houston Open the week before (also missed the cut).

One player who has looked good this year is former PGA Champion Keegan Bradley. Bradley, however, looked completely lost over his first nine holes (he started on the back nine) carding three bogeys and two double-bogeys before the turn. He rebounded a little, playing his back nine two strokes under par, but by then the damage had been done. Bradley finished with a four-over 75.

Charley Hoffman contended at The Masters, at least for the first three rounds, but couldn’t find his form in round one at Harbour Town, as double bogeys on 12 and 14 lead to a finish of two-over 73. Hoffman ranked a dismal 121st in the 132-man field in shots gained: tee to green.

“I drove the ball really well. That’s kind of first and foremost out here; it’s not that long, but you have to position your ball around the tee, and I was able to do that and get some short clubs in and make some birdies.”
– Bud Cauley, Round 1 Leader