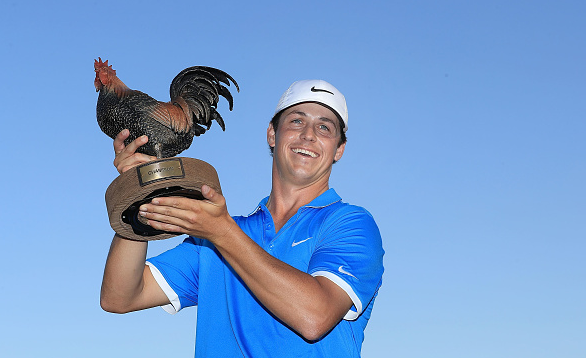 Cody Gribble shot a final round 7-under 65, highlighted by 5 birdies on the back nine, and captured his first career PGA Tour victory at the Sanderson Farms Championship.

The former Texas Longhorn started his day at 13-under, 1 stroke behind co-leaders, and playing partners, Luke List and Chris Kirk – who were at -14.

At the turn, it was still pretty much a dead heat, with Gribble and List 1-up on Kirk. But on the backside, the 26-year-old Gribble put on the after-burners and pulled away by dropping 5 birdies over a span of seven holes.

For the tournament, Gribble ended up at 20-under and topped List, Kirk and second round co-leader Greg Owen by 4 strokes – who all finished at 16-under.

Gribble was not particularly accurate, both off the tee or attacking the greens, finishing T38 in Driving Accuracy, and T29 in Greens in Regulation.

What It Means For Gribble

Gribble entered the season as an unheralded rookie, who secured his Tour card by finishing T20 (of 25) in the Web.com playoffs.

The win in Mississippi comes with all the perks you would expect from a PGA Tour title, including 300 important FedEx Cup points, and $756,000 in cash. It also gives Gribble the security and insurance of a 2 Year PGA Tour Exemption, as well as an invite to the 2017 Tour Championship in Hawaii.

The only regular perk he doesn’t receive, due to the Sanderson Farms being an opposite field (WGC) event, is an invite to the Masters. But Gribble’s well on his way to earning a spot, as he now stands in the 4th spot in the FedEx Cup race after only two starts – due to his big win in Jackson (MS) and a T8 in Napa at the Safeway Open.

“It was an unbelievable experience. The course, from the hospitality to the golf course to the fans, I couldn’t have asked for a better venue to win. I can’t thank everybody enough for coming out. My sponsors Nike Golf and Ewing Buick Automotive, Mercedes, for what they’ve done for me to get me to this spot.”
–Cody Gribble, thanking the world after his first PGA Tour win.