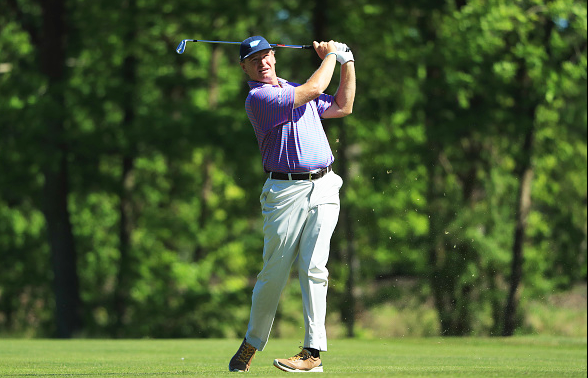 In today’s PGW Rundown, two South African golfers make news in Europe; one getting praise while the other getting criticism, a change could be coming at the top of the Rolex Rankings, an NCAA champion is deciding whether pro golf is for her, and a Tour vet created controversy at the Senior PGA Championship.

Els Lauded For Calling Penalty On Self

In a sport that prides itself on class, few players in professional golf have exemplified that trait more than South African legend Ernie Els. On the course, he has been one of the best ever: 71 career wins worldwide, including 19 on the PGA Tour, and four major championships. Off the course, he is known as an ultimate gentleman of the game.

On Thursday, during round one of the BMW PGA Championship, the European Tour’s flagship event, the 47-year-old made a move that has further improved that already strong reputation. He called a penalty on himself that he almost definitely would have gotten away with had he stayed silent.

“Under the rules you try and put it back the way you think it should be, but I still felt uncomfortable with it, so we took a two-shot penalty,” Els said. “I know deep down the ball wasn’t quite where it should be and I wouldn’t be able to live with myself.”
–Ernie Els

While Ernie Els improved his already-immaculate public image by taking a penalty he didn’t need to take, fellow South African Branden Grace is facing scrutiny for a decision he made on the course.

Grace got relief from a bunker after claiming that he could not take a proper stance due to the rubber lining beneath the sand. Grace is now defending the action after criticism from other players. Grace finished the round at four-under 68, just two strokes off the BMW PGA Championship lead.

“A rule is a rule, and I took advantage of the rule there, and it helped knowing the rule in some respects. Fortunately for me, I got away with a good drop but I still made bogey. The rules are there for a reason. Sometimes it works in your advantage, and sometimes it doesn’t. In this case it did.”
–Branden Grace

One of the more intriguing storylines at the Dean & DeLuca Invitational is the inclusion of Canada’s Jamie Sadlowski in the field. Sadlowski is famous for his incredible success in long-driving competitions, which he retired from last year to pursue a professional golf career.

He has been playing on the Web.com and MacKenzie Tours, but was given his first entry into a PGA Tour event as a “champion’s choice,” a Colonial tradition where the past champions decide on two players to give a special exemption to. Sadlowski was 3-over in his first round, which left him in a tie for 75th.

“I look at this as I’m trying to start a new career and I’m working hard at it. At the end of the day, I want to prove myself I can play out here.”
–Jamie Sadlowski

World No. 1 Lydia Ko’s Three-Week Break Could Come At a Price

For the past 83 weeks, 20-year-old LPGA phenom Lydia Ko has stood atop the Rolex Rankings, the women’s version of the Official World Golf Rankings (OWGR), the third longest stretch at No. 1 in the history of the Tour.

However, Ko may not have it much longer. Currently taking a three-week break from the LPGA, she is risking losing that No. 1 spot to two players who are in the field for this week’s event, No. 2 So Yeon Ryu and No. 3 Ariya Jutanugarn, who are both close to her in the rankings.

“I’m going to take some time off, maybe chill, and maybe see a little of Orlando. I’ve lived there for four years, but I haven’t been able to travel around there and maybe be the tourist.”
–Lydia Ko, in an interview with the Golf Channel.

While the biggest star of LPGA Present (Lydia Ko) is making news for taking time off, a talented woman who could be a big part of the LPGA’s future, is deciding whether she even wants to go professional.

Monica Vaughn, a star collegiate golfer who just won the NCAA individual title, and was the best player on the Arizona State team that won the NCAA team title, could not have asked for a better end to her senior season. Vaughn unquestionably has the talent to go pro, but at least for now, she is keeping her amateur status.

“I can’t say I’m 100 percent going to do it,” she said. “But it’s there if I want, I think. I want to make sure that I do it for the right reasons and not because someone else wants me to do it or because it’s the only thing I’ve ever done. I want to do it because I love golf and I want to practice and improve and be the best player I can be. At the moment, I just want to have fun and relax.”
–Monica Vaughn

Fred Funk won eight times on the PGA Tour during his career, and since turning 50 a decade ago, has added nine more victories to his total as a regular on the Champions Tour. Funk has avoided controversy for most of his career, but was unable to do so in the lead-up to this week’s Senior PGA Championship. 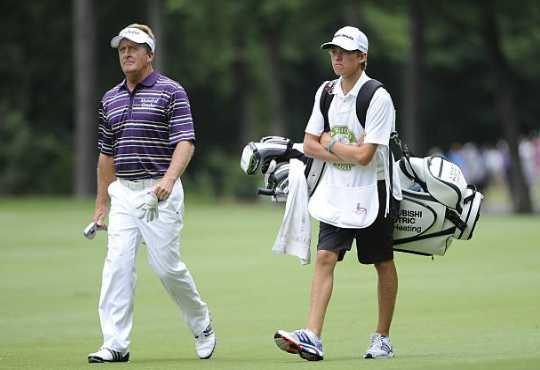 A comment he made was referred to as “sexist” by USA Today sports columnist Christine Brennan, and now Funk’s son, a collegiate golfer at the University of Texas, is taking up for his father.

“I’m sorry Ms. Brennan, but there is 1 thing my dad is not and it is sexist. The fact that you think these comments are sexist is beyond me.”
-Taylor Funk, via Twitter