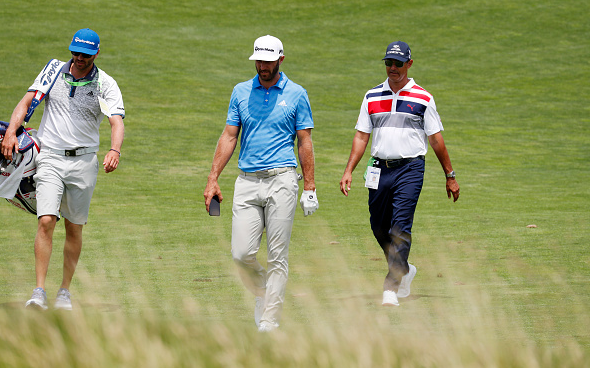 In today’s PGW roundup it’s all U.S. Open. We have Kevin Na backtracking on his viral video; the USGA is trying to help its officials avoid another rules disaster; DJ’s new son has a name; Rory is raring to go with no limitations; and while Phil might not be in Wisconsin, his caddy is still hard at work.

Rory Is Ready To Go With No Limitations

Rory McIlroy, the four-time major winner, has missed significant time in 2017 with a rib injury that he suffered while testing equipment in the offseason. He missed a month earlier this year, and then re-aggravated the injury at THE PLAYERS Championship.

He has not played since the PGA’s flagship event one month ago, withdrawing from both the European Tour’s BMW PGA Championship and the PGA’s Memorial Tournament.

On Tuesday at the U.S. Open, McIlroy told the media that he is 100% and that he has “no limitations whatsoever” for this week.

“I wasn’t crying when I saw that rain last night and this morning. It’s a long golf course, and it’s only going to play longer. That benefits a few guys, and luckily I’m one of them.”
–Rory McIlroy

Going Above and Beyond: ‘Bones’ Scouting Erin Hills

As each day has passed, it has looked increasingly less likely that six-time U.S. Open runner-up Phil Mickelson will get the inclement weather he needs to get from Carlsbad, California, the site of his oldest daughter’s high school graduation, to Erin, Wisconsin, the site of this year’s U.S. Open.

The chances as we write this are easily in single-digits, if not close to zero, but that has not stopped his caddy, Jim ‘Bones’ MacKay, from doing his job.

MacKay has been at Erin Hills the past two days, scouting the first-time major course, and looking for any ways he can give his boss an advantage.

UPDATE: As of around 8:30a this morning, Phil Mickelson has officially withdrawn from the U.S. Open. Roberto Diaz will get his spot.

Defending U.S. Open Champion and world #1 Dustin Johnson has been rather distracted while preparing for his title defense at Erin Hills. His fiancee, Paulina Gretzky, gave birth to their second son on Monday.

Photos have been circulating around the depths of the internet for the past three days, but a name had not been officially announced. That changed on Wednesday: the baby boy, blessed with some of the most incredible athletic genes, is named River Jones Johnson.

“The last 48 hours have been awesome. Having a new son has been fantastic. Everybody is healthy. It’s been great.”
-the always laconic Dustin Johnson

Early this week, Kevin Na became golf’s newest viral sensation when he posted a video to his instagram account, a video which showed his ball getting lost in the deep fescue just paces off the fairway at Erin Hills.

Na used a stern, aggravated tone in the video, but is now saying that his tone was misinterpreted and the video was meant as a joke.

“I think people overreacted with the video. It was meant to be funny. I was just trying to show the fans the rough, and what we have inside the ropes, because people don’t get to see that close up. And I think it just blew up. … I think if I had laughed about it during the video instead of making it more like the news, I think people would have got a better kick out of it, maybe.”
–Kevin Na

Centralized replay has been a big improvement in both the NFL and NBA, and at least for the U.S. Open, the USGA has instituted something similar.

Hoping to avoid the kind of rules controversy that marred last year’s U.S. Open, the USGA has put two new policies into place to help rules officials, with one of those policies making the USGA Senior Director of Rules a “chief referee”.

“Our intention is to act as quickly as possible while being thorough in the consideration of all the facts and also being thoughtful in communicating with the player in an expedited and decisive way.”
–John Bodenhamer, USGA Senior Managing Director of Championships and Governance