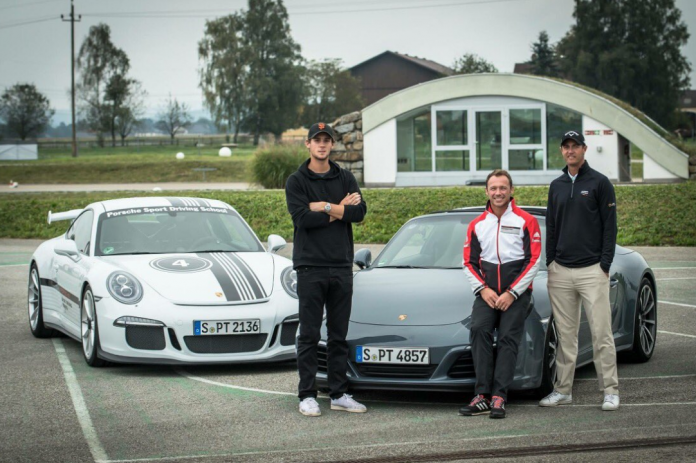 We have hit mid-week during the last week of the PGA Tour season. Thirty PGA golfers still have work to do as the winner of the FedEx Cup wins $10 million. Stakes are also high on the Web.com Tour as the third event of the four-tournament Web.com finals happens this week, in Columbus, Ohio. The top 25 on the Web.com Finals money list will earn PGA Tour Cards for next season.

The big news of the morning: TaylorMade has re-signed the top two golfers in the World Rankings, Jason Day and Dustin Johnson. The two were set to become the two most coveted free agents since Peyton Manning was being courted by half the NFL in 2012.

Day has been with TaylorMade for ten years, DJ nine. It basically guarantees that TaylorMade will have exposure at every big-ticket event for the foreseeable future. Details of the new deals have not yet been released.

Both Day and Johnson tweeted about their new deals this morning.

.@TaylorMadeGolf helped me get to world no.1 & I'm choosing them to help me stay there. Proud to be #TeamTaylorMade! pic.twitter.com/1kkIcOkNlV

I've been a part of the @TaylorMadeGolf family since day one. Excited to keep playing the best gear in the game! pic.twitter.com/luXZm5nk8U

TaylorMade put out a video showcasing the two stars as well:

The Web.com Tour has received a lot more attention than usual lately, with their finals happening this month. The first two rounds are done, and this week, the tour goes to Columbus, OH for the Nationwide Children’s Hospital Championship at the Scarlet Course.

The top 25 on the money list after the four week finals will receive their PGA Tour card for next year:

Notables who have secured their card:

Notables who still have work to do:

Speaking of the Web.com Tour, news of Michael Thompson’s victory at the Albertson’s Boise Open spread a long way:

To the victor go the spoils. ? pic.twitter.com/hURV9XKPqo

Drive of the Week

This week’s European Tour event is the Porsche European Open. With Porsche being the host sponsor, there is great potential for the players to do something awesome.

Thomas Pieters, who was recently named to the European Ryder Cup team by captain Darren Clarke, and the long-hitting Nicolas Coelsarts were given test drives.

Man of the Year

Jim Furyk was recently names the recipient of the Payne Stewart Award, an honor that is given each year to the man the committee believes best exemplifies great values on and off the course, and good sportsmanship.

Congrats to my friend Jim Furyk on receiving the Payne Stewart Award tonight. Great player and a better person.

Furyk is considered one of the contenders for Love’s last Ryder Cup Captain’s pick. It is probably encouraging to Furyk that Love has a high opinion of him.

LPGA Golfer Paula Creamer of the U.S., in France, took a picture in front of the Eiffel Tower at night.

Brutus the Buckeye, one of the most beloved mascots in all of sports, had to cut off a shot from a player of a rival Big Ten School. This week’s Web.com Tour event, the third round of the finals, takes place at Ohio State University’s campus.

Justin Thomas, in the midst of the best season of his very young career, and a hopeful for the last Ryder Cup Captain pick, is at the Tour Championship at East Lake in Atlanta, Georgia. Thomas commented on the pureness of the East Lake terrain, which led to a funny response from Daniel Berger, who is also there.

you enjoying your first time here?

Justin Thomas is currently 12th in the FedEx Cup Standings going into the final event. He will need a win and some help to take home the FedEx Cup and its $10 million prize. Thomas has an impressive five top three finishes on the season, including a victory at the CIMB Classic.

Berger is further back in the standings at #26. Berger also has one victory on the season, at the FedEx St. Jude Classic. Berger is the reigning Tour Rookie of the Year, an award that is expected to go to one of Emiliano Grillo, Smylie Kaufman, or Si Woo Kim.

“We’re All in Tears”: Richard Bland, Family ZOOM Through Emotions After...

“Spinnier” and “Screaming”: Spieth on the New Titleist Pro V1x

At 48, Richard Bland Claims Maiden Tour Win at the British...

Brooks Koepka and Other Big Names Who Missed the Cut at...