Dustin Johnson fired a 7-under 66 on Saturday and will take a two-shot lead into the final round of the Sentry Tournament of Champions. 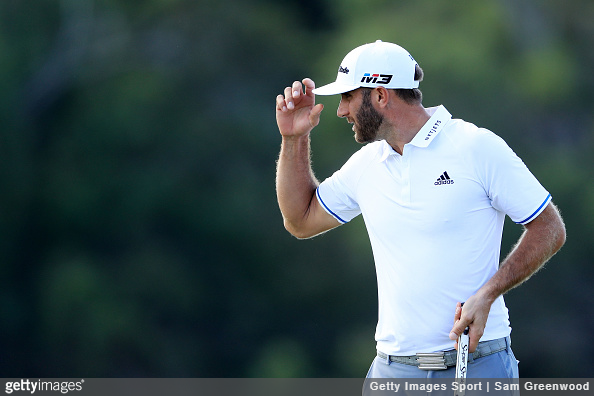 Johnson finished his third day at Kapalua with six birdies, one bogey, and a hole-out eagle on the par-4 12th.

“It just felt like today was pretty easy. Never really got really out of position,” said Johnson, who will be seeking his 17th PGA Tour win on Sunday. “Number 11, which I actually hit a really good shot, it just rolled off the back and I just hit a poor chip, didn’t get up-and-down there. But came right back and holed it from the left rough on 12.”

Brian Harman the co-leader after 36 holes, posted a third-round 69 and sits alone in second at 14-under par. The Georgia native’s round was highlighted by an eagle at the par-5 fifth hole.

Harman will be paired with Johnson in Sunday’s final twosome.

“I’m just going to keep doing the same thing I’ve been doing and I’m going to try to put as much pressure on the golf course as I can,” said Harman, who finished 16th in the 2017 FedExCup standings. “I’m going to try to do the best I can on every shot. I can’t control what Dustin does, he’s a fabulous player, he’s going to be really hard to beat tomorrow, but trying to do something I’m not capable of is not the way to do it.”

Two further back is John Rahm, who fired a bogey-free 66, matching Johnson for low round of the day. The young Spaniard has a three-day score of 12-under par. 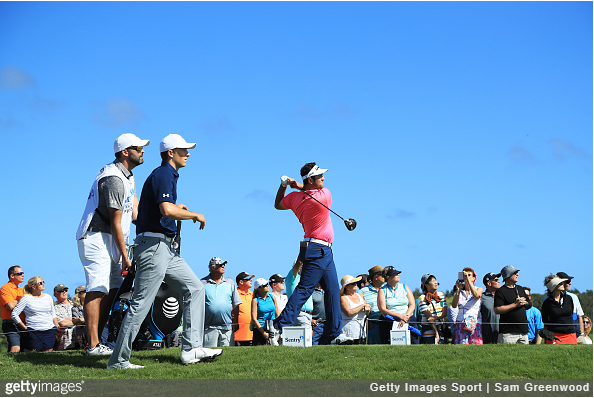 “Great round. Bogey-free. I didn’t think this week it was going to be a bogey-free week, but really extremely content for what happened today,” said Rahm, who was paired with Jordan Spieth in the day’s marquee twosome. “Felt really comfortable throughout, especially on my short game. I relied a lot on it, a couple of good chip shots and some really good putts, it was good to see a couple go in.”

Rickie Fowler shot a bogey-free 68 and is tied for fourth with Jason Dufner (69) at 11 under.

Jon Vegas and Pat Perez posted matching 71s and are tied at 10 under, one ahead of Chris Stroud (72).

Spieth, meanwhile, signed for 3-under 70 and is deadlocked with Daniel Berger (68) and Billy Horschel (70) at 8 under.

“Yeah, I had, I don’t know, maybe 60 front and then 75 hole or something like that, straight down wind. I knew I just wanted to land it, and I was kind of looking just left of the flag, but short of the green and it hit and rolled on the green. And I knew once it got on the green that it was going to be pretty good. And, obviously, it went in, so that was definitely a nice bonus.”
– Dustin Johnson, on hole-out eagle