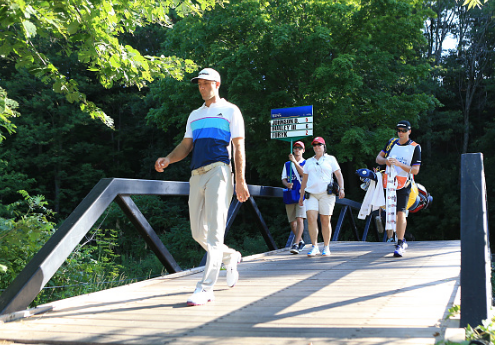 Dry, windy conditions made Glen Abbey a tough go at the RBC Canadian Open, and after 36 holes, we have the same co-leaders from round 1: American bombers Dustin Johnson and Luke List at 7-under par. Young Spanish golf prodigy Jon Rahm, the relatively anonymous Kelly Kraft, and 21-year-old Canadian amateur sensation Jared du Toit are one stroke back.

Despite shooting matching 1-under 71s, the second rounds of Dustin Johnson, the U.S. Open winner, and Luke List could not have been much more dissimilar. Johnson’s start was an absolute nightmare. Starting on the back nine, which has been playing easier than the front nine, he went par-bogey-double-bogey to drop four strokes in four holes. Johnson would say after the round that he did not hit poor shots on those holes, but rather imputed the start to awkward lies. From there, he played his last 14 holes five-under to finish one-under for his round.

List, a 31 year old journeyman, birdied his first two holes, but mostly struggled from there, going +3 over his next 12 before finishing with birdies on Glen Abbey’s two late round par-5s: 16 and 18.

Where there wasn’t much difference between the two, however, was distance off the tee. DJ averaged 340 yards to List’s 328. Both rank in the top 10 on Tour in that statistic.

Chad Campbell and Kevin Kisner rebounded from matching 1-over 73s in round one, and played their second 18 at 5-under 67, tied for the low round of the day. The biggest swing from round 1 and round 2 was from Billy Hurley III who shot a 4-under 68 after a 6-over 78 yesterday. The Quicken Loans National winner made the cut on the number.

Chesson Hadley started the day T3 after an opening-round 67, but a dismal 5 6’s lead him to a round of 6-over 78. At +1, Hadley did make the cut, but is now eight strokes out of the lead. Steve Wheatcroft plummeted down the leaderboard after a second-round 77. Like Hadley, Wheatcroft is at +1.

Attempting to become the first Canadian to win the national open since Pat Fletcher in 1954, Jared du Toit bounced back from a triple-bogey 8 on his 11th hole with three birdies in his last four. Hitting two-thirds of his greens in regulation has been the key to the Arizona State senior’s amazing start. Adam Hadwin was the low Canuck of the day, shooting a 2-under 70. He is at -2 for the tournament.

Garrett Rank, the amateur golfer and professional NHL referee, shot a disappointing 3-over 75 to fall seven strokes behind Johnson and List.

The big disappointments were David Hearn, who led last year’s tournament after 54 holes, and Graham DeLaet, widely considered the best golfer in Canada. Both Hearn and DeLaet missed the cut.

“I was four-over through six holes, but I knew I had par 5s to play, so I knew I needed to do something on those holes. I felt like I played really good after the first couple of holes; I hit some really good shots and I played nicely.” – Dustin Johnson