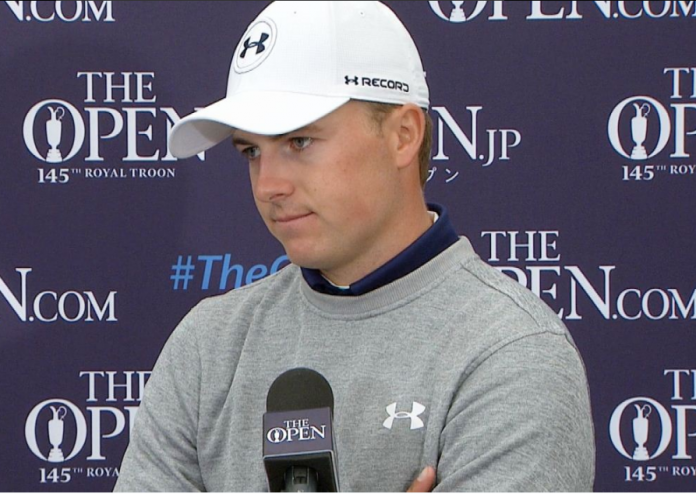 Phil Mickelson and Henrik Stenson have just teed off and it looks like they won’t have it easy today. The wind has been blowing hard all morning, with gusts of 25mph. The latest forecasts indicate that it should remain the same throughout the day.

And to make matters worse, it might just rain a bit.

The R&A sent out a note this morning pointing out that they didn’t roll or cut the greens overnight. Keeping the forecast in mind, they also moved a few tees up. The “Postage Stamp” 8th is playing just 100 yards today.

Weather update! Could the wind cause problems today?

Here’s what the forecast looks like for the rest of the day.

World No. 3, Jordan Spieth had a hot start this morning, with four birdies over the first seven holes. But he faltered after that with three bogeys and a double-bogey on the 11th. In his post-round interview, Spieth pointed out that he’s frustrated about all the negative comments about his game.

Spieth admits he's feeling frustrated with negative comments being made about his game: https://t.co/4ARW6OW6Uv pic.twitter.com/uP6JVUnv2p

2013 US Open Champion, Justin Rose had the best round going in the morning. He was 3-under par with three to play, but ended up making a double-bogey on the Par-5 16th.

Masters Champion, Danny Willett holed a clutch putt on the 18th yesterday to make the cut on the number. But any momentum that he carried from that putt didn’t show today. He was three-over par on the easier front nine itself, but two crucial birdies on, 11th and 16th, helped him shoot an even-par on the back. Here’s his bunker shot on the 8th.

WATCH: Second time lucky for @Danny_Willett! Watch on Sky Sports The Open. Brought to you by @MasterCardUK https://t.co/fYCfGk8712

Just like Spieth, Jason Day started out the day in the right direction. He went out in 32 with birdies on the 2nd, 4th, 7th and the 9th. The back nine got the best out him again and he ended up making four bogeys. Interestingly, he is yet to birdie a single hole on the back nine this week.

Tale of 2 Nines at #TheOpen
Jason Day 4-under out. 4-over in. pic.twitter.com/7wJDlZHK9A

Brandt Snedeker had quite an eventful day this morning, shooting a three-under par, 68. But the highlight of his round came on the 9th. Have a look.

Brandt Snedeker has a run in with a TV tower at the 9th. #TheOpenhttps://t.co/KBDJa8D5FQ

Some other scores from this morning.
Danny Willett +3
Lee Westwood +2
Bubba Watson +1