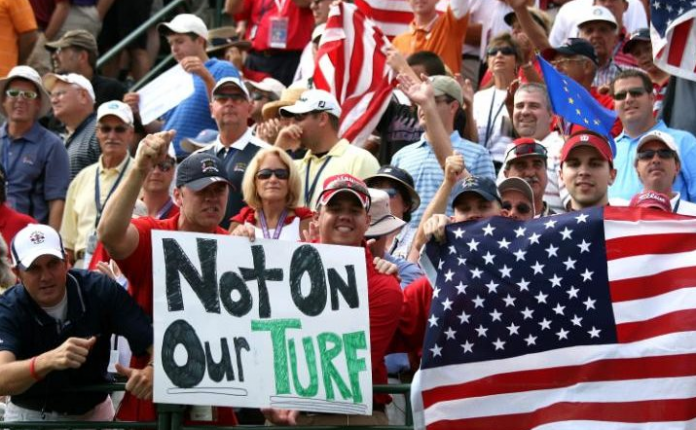 Bob Harig is a leftwing golf writer for ESPN, who has basically made it his mission to tar and feather American golf fans for the actions of a few at Hazeltine.

We can’t confirm if Harig was the American scribe who led off the European team press conference by telling Rory McIlory that he’s “embarrassed to be an American.” But if it wasn’t, he certainly seems to have spoken for Harig.

To set the table, and get past the spin of the far-left media’s echo chamber, the animosity between American golf fans and the European Team was kicked off by Danny Willet’s brother, who penned a hate-filled, incendiary Ryder Cup preview story on the National Club Golfer website.

In the article, Willet’s bro came off as a South Park version of a smug liberal, while trying to claim the cultural high ground.

Harig never once tweeted about this huge controversy in the lead-up to the event – despite Captain Darren Clarke and Willet himself having to make statements to the press.

The reporter’s Ryder Cup coverage on Twitter was non-stop criticism of the fans. (Remember, Harig works for ESPN.)

Here are the 20 Words Harig used to describe American Golf fans, in between reporting on the actual matches.

Maybe the best way for American fans to handle the Danny Willett situation would be to NOT act like the imbeciles his brother referenced?

Being a jerk only feeds the stereotype, and doesn't help the home team https://t.co/kOjwLytdik

no problem with energy, passion. Being a jerk? Not so much

hey, just seems silly to me. I guess it's your right to be an ass if you want to be one

Well. .. They can be offensive and unfunny https://t.co/HXaTnTCyrR

The classes and inebriated certainly could have had a field day with Tiger over there; and didn't. So no, not the same in Europe

Alcohol or not, just don't see why this is necessary, how it contributes to having "fun.'' https://t.co/v8h4kPny78

sorry but it's totally point missing if you can't understand how over the top even a few were. just not acceptable

sorry but you're wrong. no player hears any of it at an NFL game. the personal abuse Willett got was sad

i've been to 3 RCs over there and certainly there is stuff that crosses the line; but nothing like the venom yesterday

Wow. Rory in the water and the 16th hole loses its mind

nothing wrong with rooting against him. of course. to hear the stuff i heard… awful

the enemy? That pretty much says it all. His actions were in response to constant abuse. Vulgar

It says something about fan behavior that PGA of America felt need to issue statement, put up signs, have video messages asking for civility

it would have been even better without the rubes. a huge topic among the players on both sides.

It suggests there are a good number of people who are embarrassed by what has gone on https://t.co/Apgc0WxNU2

Well said by @johnhuggan Ryder Cup was terrific but a few lame souls caused a lot of tension https://t.co/H4GweXLKUp

There's rowdy, and then there's what happened Friday at Ryder Cup – via @ESPN App https://t.co/Xk831zADMt

Re fan behavior rant. Getting lots of "don't they do it in Europe?'' Best example: Not a single report of Tiger getting abuse in Wales 2010

Good. Love how people think they are getting to him and what actually is happening it it makes him more determined https://t.co/OLzleHVpqQ

you're free to unfollow big man

Here here is the thing about the Rory taunting.might be the opponent now but he is genuinely one of the nicest guys out here. True champ

golf isn't the nba. there's a decorum. you never see this as a regular event and shoudn't see it here. today was great w/o it

It is poss. to applaud an amazing Ryder Cup AND point out that fan behavior got out of hand. Too big of a talking point to ignore

This doesn’t include the many retweets of Harig which smeared and slammed American golf fans.