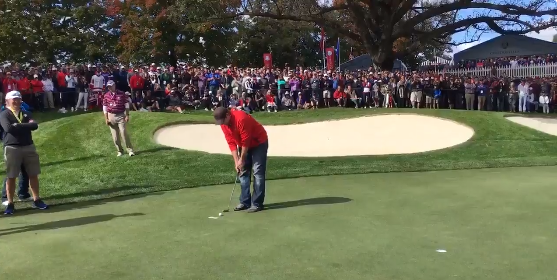 A fan was heckling some of the European players over a putt they were having difficulty with. Rory McIlroy, Henrik Stenson, and Justin Rose just couldn’t figure out the line and the US fan was letting them have it.

Stenson had had enough of his heckling so he decided to pull him out of the crowd and make him try the putt.

Fan chirping Team Europe​ at Ryder Cup practice​, is asked to put money where his big mouth is, for $100. Amazing. pic.twitter.com/mzlDzu2ASR

Is this what the Americans have been missing the past few years? This fan has more balls than most of the American teams.

Here he is afterwards talking with a reporter:

The putt heard around the word. #TeamEurope pic.twitter.com/jm714TA0qu