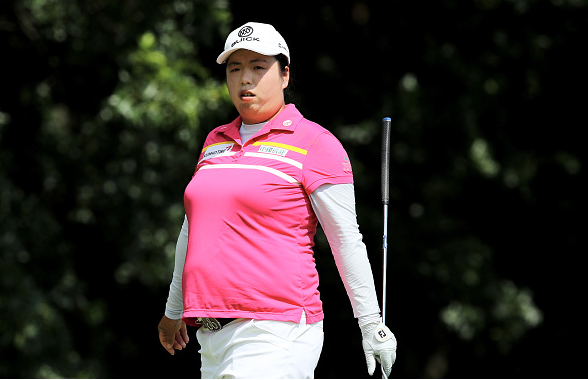 Shanshan Feng posted a 1-under 70, highlighted by a birdie on the 18th, to maintain her lead at the U.S. Women’s Open after three rounds.

The 27-year-old Chinese star is at 9-under 207, following a round which included 17 pars and one important birdie at Trump National Golf Club.

“Coming to this week, I didn’t have any expectation at all,” said Feng, who has led after each of the three rounds. “I just wanted to bring out my A game. And then I think I did really well for the first three days, and then I’m going to stick to my game plan. I just focus on my own game and let’s see what happens.”

A contingent of South Koreans hold the next six spots on the leaderboard, including amateur Hye-Jin Choi and Amy Yang, who shot matching 70s to finish at 8-under, tied for second.

Rookie Sung Hyun Park posted a birdie-free 1-over 37 on the front, which dropped her to even-par for the tournament. But the 23-year-old Korean caught fire on the back, ripping off a string of six birdies (three sets of back-to-back) to finish with a 67, and 6-under for the tournament.

“The first half didn’t go as well as I wanted but I was — I kept telling myself that I should stay and be patient because then I will probably get a good birdie chance,” said Park. “I think which probably I believe that was going to happen and then I guess that’s how I came with lots of birdies.”

“I feel pretty good,” Kerr said. “I’m going out there doing my thing, and I’m trying to be in a good mental space where I’m not putting pressure on myself.”

Candian star Brooke Henderson (73) is at 2-under, along with American Christina Kim, who shot a 68, highlighted by a six hole stretch of five birdies. Henderson and Kim are tied for 14th alongside Korea’s Sei Young Kim (72) and American Marina Alex (73).

American Stacy Lewis had the most heartbreaking round of the day. Through 10 holes, the former World No. 1 was having a dream round, with no bogeys and five birdies, including four straight (7, 8, 9 and 10).

The hot stretch had gotten Lewis to within a shot of the leader Feng. But then, stunningly, it all fell apart, with a triple bogey on 11, followed by a bogey on 12, and a 10! on the par-5 18th. Over the final eight holes Lewis was 9-over par, dropping from T2 to T36. She finished with a 4-over 76 on the day.

Defending champion Brittany Lang was even worse, posting an 8-over 80. She’s at 10-over.

Recapping the top moments from the third round of the 72nd #USWomensOpen. pic.twitter.com/3V0VPTJluU

“Plan A is to hit fairways and greens and try to make the putts. If the putts aren’t going in, Plan B is to hit it even closer, so the putts will be a little easier.”
–Shanshan Feng