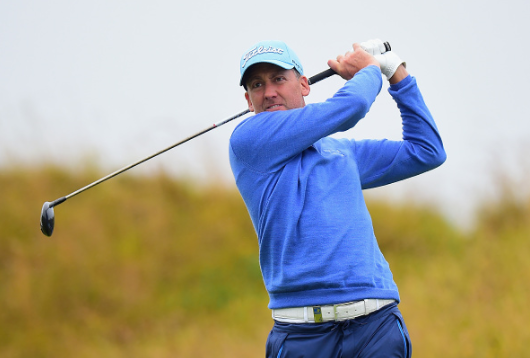 England’s Ian Poulter heads into the final round of the Scottish Open with a share of the lead after navigating his way to a 1-under 71 at a wet and blustery Dundonald Links.

Two back of the leading trio is another Englishman, Andrew Sullivan, who posted the best round of the day, a 5-under 67.

Sullivan, who was aided by an early tee time, allowing him to avoid the worst of the “brutal conditions,” joked afterwards about what the afternoon groups could face.

“When we started it was quite tough, but there was a little rain, so it was quite nice; and through the middle part of the round, the rains really started to pick up,” said Sullivan. “It’s really tough, with these undulating greens, it’s tough to get it close now, especially the ball spinning a bit more with the wedges in. Hopefully it will be really, really tough for the guys this afternoon.”

Poulter, who seemed at a career crossroads in April, when it was thought he’d lost his PGA Tour card, has played some of his best golf as of late, including a T11 at Hilton Head, and a T2 at TPC Sawgrass.

“I’m in a good mental state. Obviously a few months back, things were pretty difficult but life’s a little bit easier right now and I’m enjoying my golf,” said a smiling Poulter. “I’m excited… I relish the opportunity to try to put my hand on that trophy. It’s good to be in this position but you’ve just got to stay patient. But there’s life in the old dog yet.”

A logjam of players are at 5-under, and within striking distance, headlined by Englishman Andrew “Beef” Johnston (70), Spain’s Rafael Cabrera Bello (69), and Americans Matt Kuchar (70) and Rickie Fowler (74).

Ireland’s Padraig Harrington, who held a share of the 36-hole lead, plummeted to T23 after a brutal round of 7-over 79.

"It was brutal at times." pic.twitter.com/1HyBuONEws

Sullivan holes out for eagle on the 18th.

How do you bounce back from a double bogey at 17?@AndySulliGolf's answer: By making eagle at 18. pic.twitter.com/EbsVqo4Q5H

“Days like today don’t come around very often and I can think back to Birkdale on that Sunday, which were some of the toughest conditions I’ve ever played in. This would slide along right with it.”
–Ian Poulter