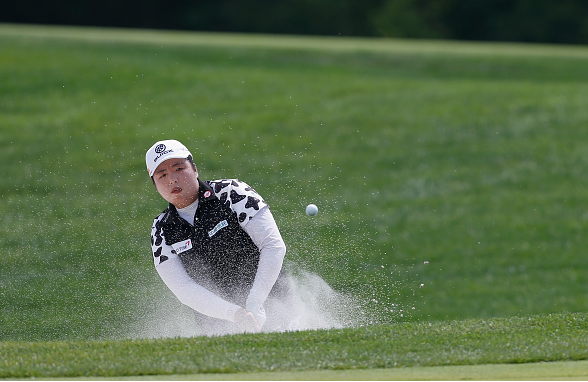 China’s Shanshan Feng fired a bogey-free 6-under 66 in the opening round of the U.S. Women’s Open and is the clubhouse leader at Trump National Golf Club.

(Due to a suspension of play, the first round will resume Friday at 6:45 AM.)

One back of Feng, at 5-under 67, is Korea’s Amy Yang, who finished with seven birdies and two bogeys.

New Zealand’s Lydia Ko posted a 4-under 68, and is tied for third with world No. 1 So Yeon Ryu of Korea and Gaby Lopez* of Mexico.

Ko, the longtime world No. 1, was cruising along at 6-under through 13 holes, but bogeyed two of the final five holes to drop two strokes.

“Obviously a little disappointing to finish up with a bogey on the last but when I kind of see how many good par saves I made throughout the day, that I think was — I’m okay with that,” said Ko in a post-round press conference.

A logjam of nine players are at 3-under 69, headlined by Australia’s Minjee Lee, American Cristie Kerr and Sei Young Kim of Korea.

Canada’s Brooke Henderson and Aussie Katherine Kirk, fresh off her win at last week’s Thornberry Creek Classic, lead a group of 16 players at 2-under 70.

Former U.S. Women’s Open champion, Michelle Wie, and Danielle Kang, who won the KPMG Women’s PGA two weeks ago, are tied at 1-over.

World No. 2 Ariya Jutanugarn started out bogey-double bogey and never recovered. The Thai superstar finished with a 7-over par 79 which included seven bogeys, two double-bogeys, and four birdies.

A hot start helped @shanshanfengCHN set the early pace in Round 1 of the #USWomensOpen and earned her the @Lexus Top Performance of the Day. pic.twitter.com/MoVOz4uH6y

“I made a little bit adjustment with my coach after I got here on Tuesday, on putting. Then I’m rolling the ball into the holes now. I’m really happy about the round, 66. That’s my low score in U.S. Open ever. So hopefully I can keep that going.”
–Shanshan Feng, U.S. Women’s Open, Round One Leader