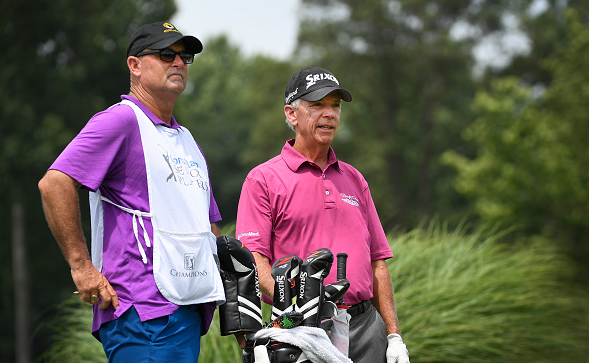 Larry Mize fired an 8-under 64 in the opening round of the Constellation Senior PLAYERS Championship and leads after 18 holes at Caves Valley Golf Club.

Mize’s round included nine birdies against just one bogey, thanks primarily to his prowess on the greens. The 1987 Masters champion made 12 one-putts, and finished with 22 putts overall.

“Obviously to shoot 64 you always have to get the putter going, and the putter was working really well today,” Mize said. “I made a bomb on No. 9 that if you would have told me I could two-putt, I’d have picked up my ball and not putted it. Things just went well for me today.”

Just one shot back, at 7-under 65, is a group of three players, headlined by defending champion Bernhard Langer, who turned in a clean card with seven birdies.

Langer, a nine-time senior major champion, and three-time winner of the Senior PLAYERS, is tied for second with Corey Pavin and Steve Flesch.

“I played very nicely,” said Langer. “Played smart, played good, putted good. Going around here without a bogey is not a bad day, and to make seven birdies, it’s nice.”

Brandt Jobe and Scott Dunlap posted matching 66s and round out the top-5 at 6-under-par.

U.S. Senior Open champion Kenny Perry struggled to a 1-over 73, and will have some work to do on Friday to make the cut. Fan favorite John Daly posted a solid 2-under 70, and is at T20.

Round One Video Highlights

Mize holds tight lead at @SENIORPLAYERS with Langer, Pavin and Flesch on his heels.

All the Round 1 highlights. pic.twitter.com/ncFPqHqYzv

“I think the setup was really good today. You hit good shots, you’ll get rewarded. You can make some birdies out there. I’m very pleased with my round.”
–Larry Mize, Senior PLAYERS Championship, Round One Leader