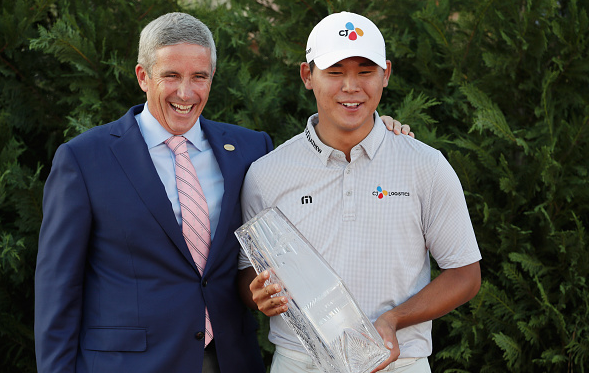 Louis Oosthuizen and Ian Poulter tied for second place at 7-under, while Rafa Cabrera Bello and Kyle Stanley rounded out the top 5, tied at 6-under.

Following a breakout 2015-16 season where he picked up his first win at the Wyndham, Kim has struggled mightily this year with just one top-10 prior to this week.

But none of that really matters now as Kim is a two-time PGA Tour winner at the tender age of 21.

The 21-year-old has claimed @THEPLAYERSChamp! ?

He’s the youngest member on the PGA TOUR. #QuickHits pic.twitter.com/f5fZEgXMte

Along with a 5-year exemption and automatic invites to all the big events, the victory also earned the young South Korean star $1,890,000 and 600 FedEx Cup points – which moved Kim from 132nd all the way up to 22nd.

WITB: Cameron Smith Drives Titleist To Victory at The PLAYERS

The 2022 PLAYERS Championship: Money, Points Earned By Every Player