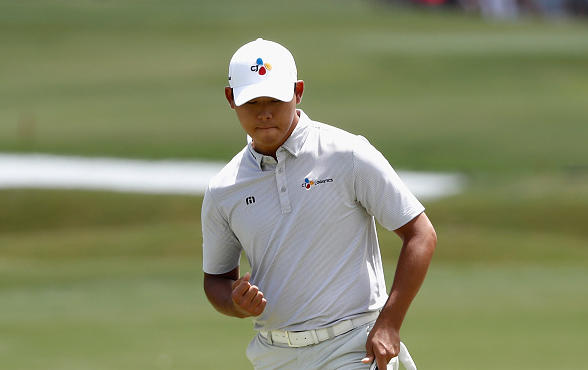 Annually hosting one of the strongest fields in professional golf, even comparable to the four major championships, the talk coming into THE PLAYERS was all about the big names.

There was the white-hot Dustin Johnson, Masters Champion Sergio Garcia, defending PLAYERS champion Jason Day, and then names like Jordan, Rickie, and Phil.

In the end, the nearly $2 million dollar first prize, five-year Tour exemption, and entry into all the near-coming majors went to the most unprobable winner, at least in recent years – 21-year-old South Korean Si Woo Kim.

Kim’s final nine was the epitome of defensive golf (9 pars), and by avoiding mistakes while it seemed every other player on the leaderboard was tripping over themselves, Kim became the all-time youngest winner of THE PLAYERS Championship.

A bogey-free 3-under 69 left Kim three strokes in front of Ian Poulter and Louis Oosthuizen, part of a top 5 represented by five different countries.

How Kim Did It

Starting the day in a tie for fourth place, two strokes behind 54-hole co-leaders J.B. Holmes and Kyle Stanley, Kim was spectacular on the front nine, carding birdies on holes 1, 7, and 9 to pull out front of an early crowd.

Once he established the lead, Kim brilliantly executed a prevent defense Bill Belichick would have been pround of. He shot par on each of the closing nine holes, staying out front while one contender after another dropped out.

By the closing stretch it was basically a two-man duel between Kim and Poulter.

But the duel effectively ended when Kim walked away from the dangerous 17th unscathed, and Poulter bogeyed 18 – giving the young South Korean a 3 shot lead with one hole to play.

And like he had done all afternoon, Kim methodically stayed out of trouble on 18, and calmly drained a little bender for par to capture his second career PGA Tour victory.

What It Means For Kim

While Kim’s victory wasn’t completely out of left field, it was a surprising result, nonetheless .

At No. 75 in the world, Kim is one of the lower-ranked champions to ever win the flagship event. Also, he was mired in a seven-month slump, and had not shown much of anything recently that would lead one to believe he was close to breaking out of it.

Several years ago, Kim, at the age of 17, became the youngest in PGA Tour history to earn his Tour card, but he did not really explode onto the scene until this past August, when he was a surprise winner of the Wyndham Championship.

He followed up the win in Greensboro with a strong performance in the FedEx Cup playoffs, finishing T17 in the final standings.

However, since a T10 at the CIMB Classic in October, Kim had been mostly terrible, making just seven cuts in 17 events with nothing higher than a T22. He was especially bad at the WGC-Mexico where a +15 meant a finish of T72 in a 77-man no-cut event, and the Masters, where he missed the cut by a mile after a 75-81 start.

Despite it all, Kim was able to put that recent poor play behind him this week, and joined Tiger Woods, Sergio Garcia, and Jordan Spieth as the four youngest players in history to record two PGA Tour wins.

Ian Poulter came into TPC Sawgrass on an extended slump of his own, making news recently when he briefly lost his PGA Tour card.

An error noticed by fellow Tour member Brian Gay got him his card back, and if not for Gay, Poulter would not have even made the PLAYERS field.

Renewed, Poulter was one of just three players in the field to not shoot an over-par round (Kim, Adam Scott).

During his one-under 71 in the final round, he even held the lead at one point, reaching -9 for the tournament with seven holes to go. Unfortunately for him, he played his last seven in +2 to fall just short of his first victory on Tour since 2012.

Poulter took second place in spite of being tied for 61st in the field in birdies for the week.

One of the biggest risers on Sunday was Brendan Steele, whose 4-under 68 tied for the low round. Steele’s seven birdies allowed him to finish T6, his fourth top-10 of the season.

Smylie Kaufman was 3-under in his final round, putting together his second straight quality start after having missed eight of his previous 10 cuts.

J.B. Holmes has struggled to put together four good rounds anywhere this season, but he was hopeful after co-leading through 54 holes.

His Sunday, however, was an absolute disaster.

A rarity on any golf tour, Holmes birdied four holes and STILL shot a 12-over 84. He was especially terrible over his last five holes, finishing bogey, bogey, par, quintuple-bogey, double-bogey. He dropped from first place all the way into a tie for 41st.

Sergio Garcia is a past PLAYERS champion, and in his most recent start, won The Masters. After a 5-under 67 in round three, Sergio was looking like he might become the second player in Tour history to win The Masters and THE PLAYERS in the same year (Tiger Woods). But he was terrible in round four, carding four bogeys and three doubles in a 6-over 78, which caused him to plummet from 7th to 30th.

Defending Champion Jason Day was even worse, posting yet another disappointing result in a disappointing year, shooting an 8-over 80 and finishing T60.

After finishing WIN, WIN, WIN, T2 in his last four Tour events, DJ never really contended at TPC Sawgrass, mostly due to his 73-74 stretch in round 2 and 3.

DJ was incredible on Sunday though, looking again like the best in the world with a co-low Sunday round of 4-under 68. His T12 looks out of place with his unbelievable set of recent results, but it was, by far, his best ever PLAYERS result.

Rafa Cabrera-Bello is another big name that has struggled this year, with nothing better than a T17 in 2017 coming in.

He was mostly quiet over his first three rounds, but suddenly exploded onto the leaderboard late Sunday.

In an all-time great shot, Cabrera-Bello bounced his second shot on the par-5 16th off a mound and straight into the hole, the first albatross in TPC Sawgrass 16th hole history.

The only albatross at @TPCSawgrass' 16th

He managed then birdied the 17th, leading to a two-under 70, and a T4 finish. He needed just eight shots on the closing stretch of 16-17-18, tied for the lowest all-time.