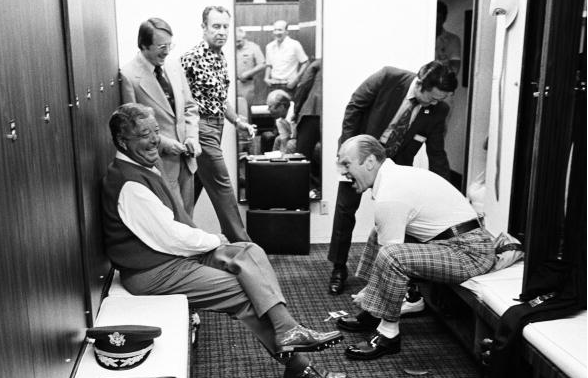 Fort Lauderdale was little more than a haven for spring break and spring training when the PGA Tour first arrived in 1972. But it had two factors at the outset that made it a guaranteed success – the biggest purse and its most outsized personality.

Jackie Gleason already was a longtime fixture at the Tour’s Doral stop – one of TV’s biggest stars with a variety show based in Miami Beach – when he jumped at the chance to put his name on the new tournament.

The new Jackie Gleason Inverrary Classic attracted Jack Nicklaus, Arnold Palmer and plenty of other big names – on and off the course. Gleason’s partner in the inaugural pro-am was Bob Hope – a reprise of their usual West Coast pairing – and dozens of showbiz friends came at its apex.

This grainy homemade movie takes us back to 1973, and contains footage of Gleason, Hope, Palmer, Nicklaus, Tom Weiskopf, Joe Dimaggio, Lee Trevino, David Hartman, and Bobby Goldsboro, among others.

Alas, the good times lasted only nine years. Gleason somehow got on the wrong side of Tour officials, who cut him out of Tournament Players Championship promotions when it made a one-year stop at Inverrary.

When American Motors came aboard as sponsor, a dispute over naming rights sent Gleason packing.

Credit: Footage supplied by the courtesy of Diann Harmon produced and edited by Ormond Beach Video.