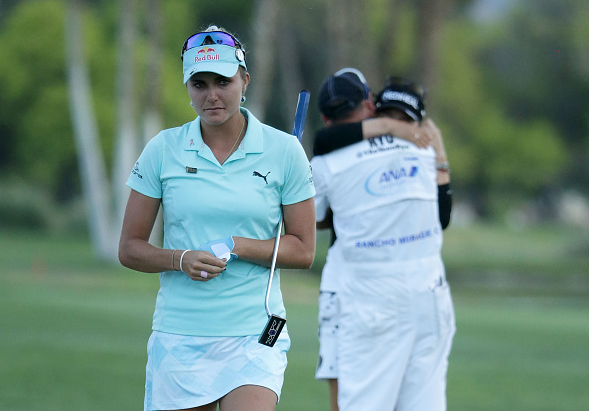 Another golf major is in the books and a controversial call once again embarrasses the struggling sport. Last year it was Dustin Johnson and Anna Nordqvist. This time the victim was Lexi Thompson.

The 22-year-old LPGA star was leading the ANA Inspiration, a major on the women’s tour, by two-strokes with just six holes to play. But after a bogey on the 12th hole, two rules officials approached Thompson to inform her that she had been penalized 4 STROKES for an infraction that occurred the previous day.

A confused Thompson responded, “Is this a joke!?”

Reportedly, a viewer emailed the LPGA to inform officials that Thompson may have committed an infraction the previous day related to marking her ball. The video replay on TV showed Thompson placing her ball marker (ON A 2 FOOT PUTT) to the side of her ball; then lifting her ball quickly; and placing it front of her ball.

The Tour penalized Thompson 2-strokes for “breaching” Rule 20-7c (playing the ball from the wrong place) and an additional 2-strokes for Rule 6-6d (signing an incorrect scorecard).

After the penalty, Thompson’s third round score was changed from a 67 to a 71 – dropping her, at the time, from 16-under to 12-under. A stunned Thompson would recover nicely, especially given the circumstances, and arrived at the 18th tee just one-stroke behind So Yeon Ryu of South Korea.

After a near-perfect second shot, Thomson was just 20-feet from an eagle which would have given her the win and a storybook ending. But the putt missed to the right by just inches. Ryu won on the first sudden death hole with a birdie to Thompson’s par.

“It is unfortunate with what happened, I did not mean that at all, I had no idea that I did it,” Thompson told the Golf Channel in a post-tournament interview. “But it’s all to the fans, they helped me get through the rest of the round and I thank them a lot.”

A defensive LPGA released a statement after the round on Twitter.

On Sunday afternoon, the LPGA received an email from a television viewer, saying that Lexi Thompson did not properly replace her ball prior to putting out on the 17th hole during Saturday’s third round of the ANA Inspiration. The claim was quickly investigated by LPGA Rules officials.

After a full review, it was determined that Thompson breached Rule 20-7c (Playing From Wrong Place), and received a two-stroke penalty under Rule 16-1b. She incurred an additional two-stroke penalty under Rule 6-6d for returning an incorrect scorecard in round three. She was immediately notified of the breach by LPGA Rules Committee in between holes 12 and 13 of the final round.

Sue Witters, the LPGA rules official, whose task it was to inform Thompson, said she had no other option available.

“What’s my choice?” she told the Golf Channel. “A violation in the rules and then it would be the opposite story: Oh, they knew, why didn’t they do anything about it. I can’t go to bed tonight knowing that I let a rule slide.”

However, many former players on Twitter disagreed with Witter’s claim, stating that she could have easily ignored the armchair rules official.

Tiger Woods, Brittany Lincicome, and Smylie Kaufman tweeted that viewers at home (some eating cheetos) have no business inserting themselves into the tournament.

Viewers at home should not be officials wearing stripes. Let's go @Lexi, win this thing anyway.

Unbelievable. Such a shame for @Lexi. The guy eating cheetos at home shouldn't have a say in the outcome. https://t.co/zCxG8apLzH

Come on @Lexi you can do it!!!!!
We really need to do something about people being able to call in. Especially days later ??. Poor girl

In a radio interview, former European Ryder Cup Captain, Bernard Gallacher, said, “The LPGA had the power to dismiss that person (the TV viewer), they should have completely ignored it.”

NBC’s Jimmy Roberts echoed how many feel about the out of touch blue blazer types.

This whole @Lexi rules debacle is so bad for golf. Just makes the establishment look like a bunch of over officious fools. #lpga

Graeme McDowell called for a simplification of the “deep dark complex” rules.

A classy Thompson defended herself on Instagram, while thanking fans, and, especially, her caddie.

Well it was an emotional day here for me, first off I do want to say what I had done was 100% not intentional at all I didn't realize I had done that. I want to say thank you to all the sponsors, volunteers and Mission Hills for making this week possible at the @anainspiration ! Also to the fans out there, words can't describe what you being there for me, meant to me. You helped me push thru those last holes so thank you for always believing in me. A big thanks to my caddy as well for always staying positive and being there for me when it got tough. I played some great golf so definitely a lot of positives to take from the week. Time for a very needed 3 weeks off now. Thank you everybody ❤