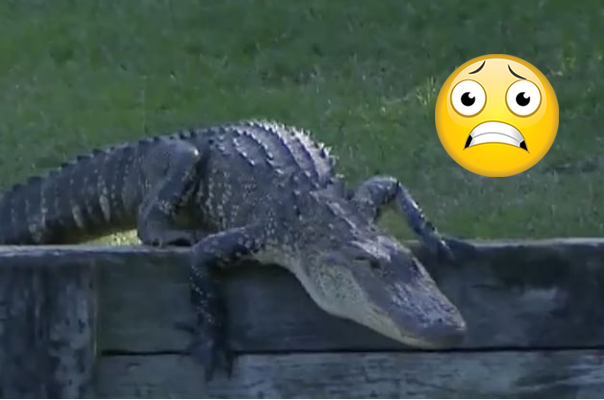 After watching some of the RBC Heritage at Harbour Town Golf Links, an American alligator decided to take a dip, and dove off a section of Pete Dye’s famous railroad ties. Unfortunately, the gator forgot to check the water’s depth and got face (or snout) planted.

As the PGA Tour announcer says, “I think he thought it was deeper than that.”

On Hilton Head Island he has found perfect conditions. This provides residents and visitors alike a fascinating natural attraction. Be careful to respect him.”

Update: Another alligator showed up to watch the second round of the RCB Heritage, parking himself along the sixth hole – which abuts a marsh right behind the sand trap.

And this gator was huge. In fact it’s reportedly “the largest alligator ever seen by humans.” All kidding aside, it looks pretty big.

"Unofficially, that was the largest alligator ever seen by humans."#QuickHits pic.twitter.com/I51EZneZ6t

Exit analysis: This is a tournament Cody Gribble needs to play in next year.