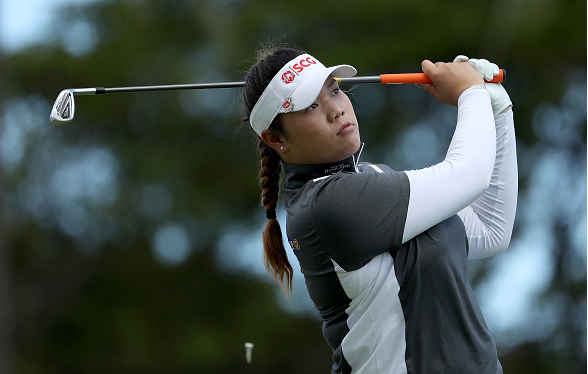 After another rain-shortened day at Ko Olina Golf Club, the leaderboard at the LOTTE Championship is still crowded with some big names at the top.

In-Kyung Kim and Ariya Jutanugarn are the co-leaders in the clubhouse at 9-under-par. Su-Yeon Jang is also at 9-under but she still has two holes to complete her second round.

Jutanugarn shot a bogey-free 66, highlighted by three-straight birdies to close out the back-nine (16, 17, and 18). Co-leader Kim, who started the day two behind Jutanugarn, fired the day’s best round, an 8-under-par 64.

A trio of players are one-shot back, at 8-under-par, including U.S. Olympian Stacy Lewis, Alena Sharp, and first round co-leader Mi Hyang Lee. Also at 8-under is Becky Morgan, but like Jang, she only completed 16 holes before play was called.

Nice 45-footer by @Stacy_Lewis to move to 6-under @LPGALOTTE! Watch more great golf shots like this NOW @GolfChannel pic.twitter.com/sLJlXzGHsV

“I had a great putting day. Yesterday I hit the ball pretty well but just didn’t make as many putts. Today, the putts were dropping. I had some good shots but I kind of scrambled very well.”
–In-Kyung Kim, co-leader